After reading through this thread, I am looking to get some aluminum Passat spindles and control arms from a local junk yard to go on my mk6 GTI. Curious to see what the prices are.
L

Might be pulling this thread out from the crypt, but i have questions related to this exact topic...

This will probably be a lot of information so let me try to lay it out logically:

Problem- my car suffers from saggy butt syndrome... Since I have extra weight for the rear coilovers to bear that they weren't designed for, the rear tucks the stock 17" wheels even when maxed out in height. However, with the control arms level in the front, it sits higher.

Goal- get parts (likely spindles) that keep the front control arms level or better even at a lower ride height, to balance nice looks, reasonably comfortable ride, and performance (I autocross and plan to track it).

Solution- I wanted h2sport spindles, but it seems that's all but impossible with them seemingly out of commission. So I looked for the next best thing, which seems to be mk2 TT spindles.

Problem with Solution- The trouble is, every time I have read anything about the TT2 spindles on our cars (mk6 golf platform) it also accompanies TT2 lower control arms. I'm not afraid of unwilling to swap the lower control arms, except for the fact that these particular lower control arms push out the track even wider, which will cause issues with the big wheels. This leaves me with two options, and two questions:

Option/Question 1- can the TT2 spindles be fitted to our cars with the stock Golf lower control arms, and will this alone solve the lowered geometry problem? The goal here being, solve the spindle/LCA geometry problem, allowing me to go lower, and preventing the track widening that accompanies the TT2 LCAs.

Option/Question 2- With the additional width that comes from the TT2 LCAs, is there any reasonable way to make the wheels work without miserable rubbing or ridiculous tire-slaying camber? I have a long commute (1.5 hrs each way) to an area with poor quality roads, so this is important. I do have an Eastwood fender roller.

Many thanks in advance!

Great thread, I did Passat parts on the front and Tiguan in the rear (same part # supposedly). Track width increased quite a bit at the rear but the front looks the same? My mk6... 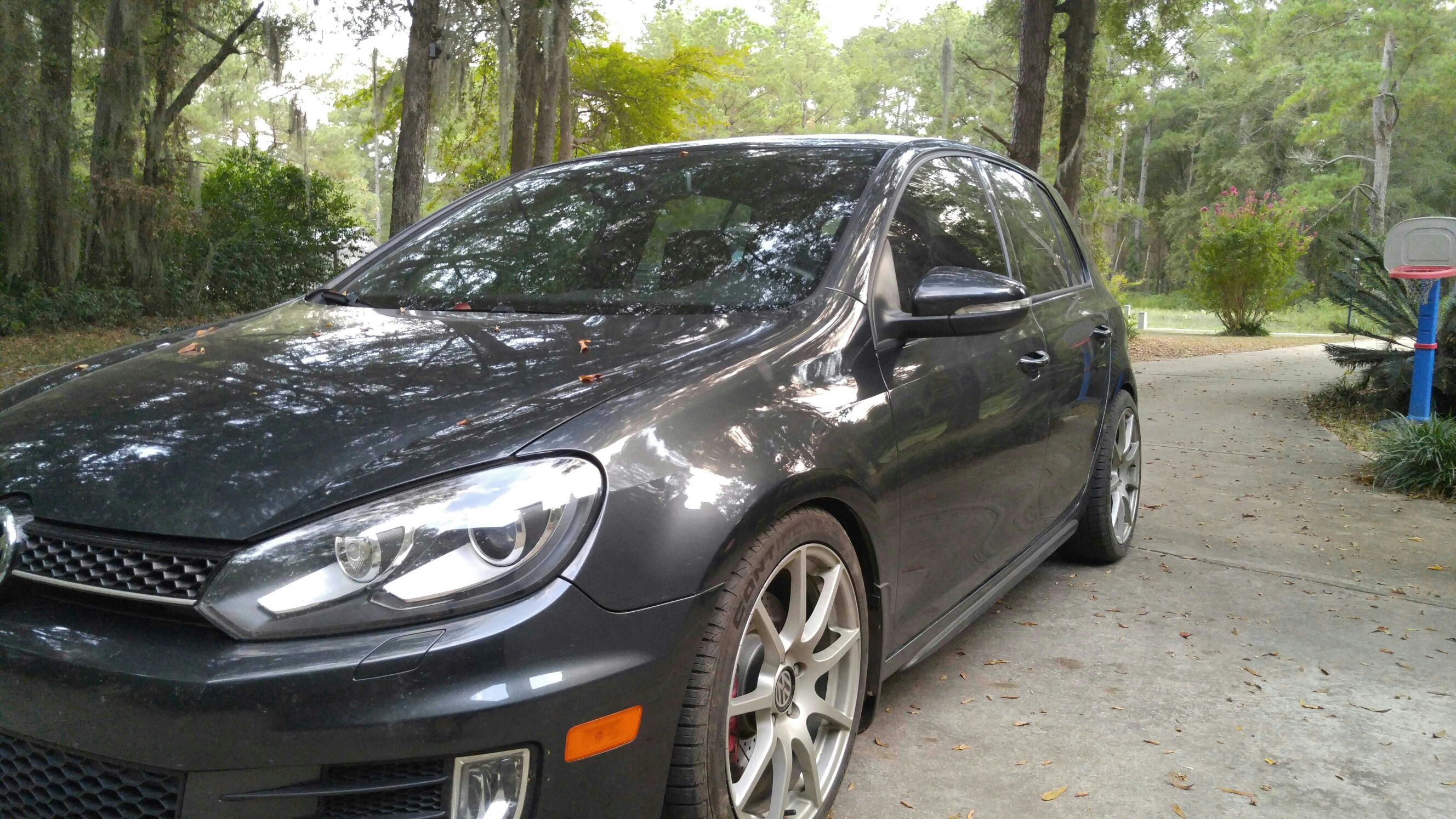 The rear? What part?

I am not responsible for any mods you do to your car. Please be safe. This is written for your minds entertainment, nothing more.


So I wanted to share some of my experiences and bring up for discussion something that has been near and dear to my GTI Experience.

My car sees the track fairly regularly for the last 6 years. and has a personal best of. 1:37.85 at Canadian Tire Motorsports Park( Mosport) GP (passat spindles)

I have tried all above spindles on my car. Currently running safely the TTRS setup( have not tracked it yet)

One of the biggest complaints on the TTRS( and all TT) is that their rack is a 16.9:1 (even slower). So in theory a TT spindle with a 2010 Gti rack is the sportiest setup.

Now to the spindles.

My stock ones looked like garbage after 2-3 canadian winters, hence my quest for an aluminum spindle began.

The Passat Spindles were the obvious choice. I also got a boxter caliper setup which worked fine with the passat spindles due to mounting.

One of the tings about this setup is the shorter arm of the spindle which leads to quicker steering. And boy is it quick. So quick that i could get my stability light going just from switching lanes... Yes everything bolted on to spec. Very very quick, maybe too quick sometimes. Nothing that I could not handle, but definitely requiring your concentration. I guess the 2012-2014 Gti will have slightly less quick steering, because of the slower rack which might lower the frequency of intervention of the nannies.


Additionally, as I got quicker, I went for 18z Cayenne Setup matched with the TTRS master cylinder.


Guess what though, this doesn't work with the Passat Spindle, because of the large ears on the Passat spindles throws everything out of whack.

So I had to go back to stock spindles..... to run the 18z while working on fitting the Audi TT spindles

To fit Audi TT spindles was tricky, and people have done it before , but none were really plug and play. 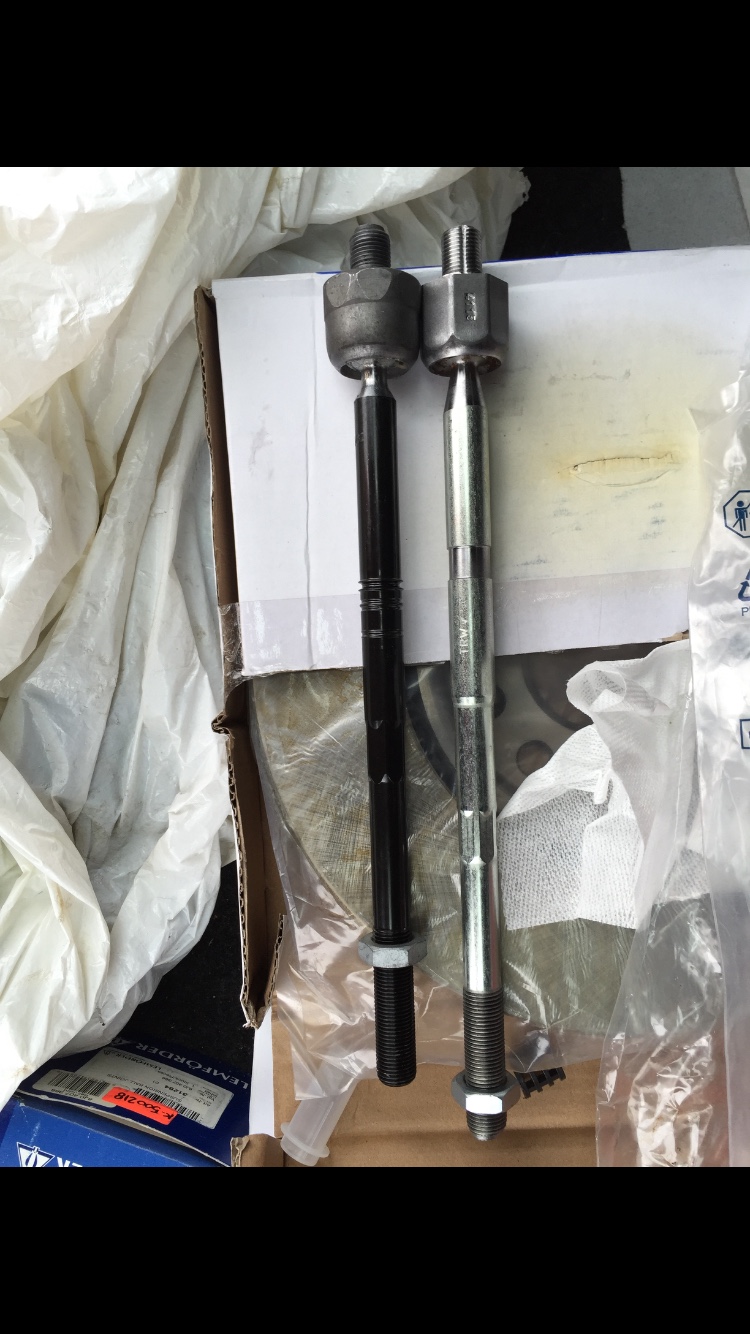 - even with those the inners Gti tie rods are too tiny in diameter and overall profile to securely be bolted on the spindle.
-thebruce mentionned he has friends that have swapped the whole rack for a TT, but the TT ratio is 16.9:1 , hence not very sporty. 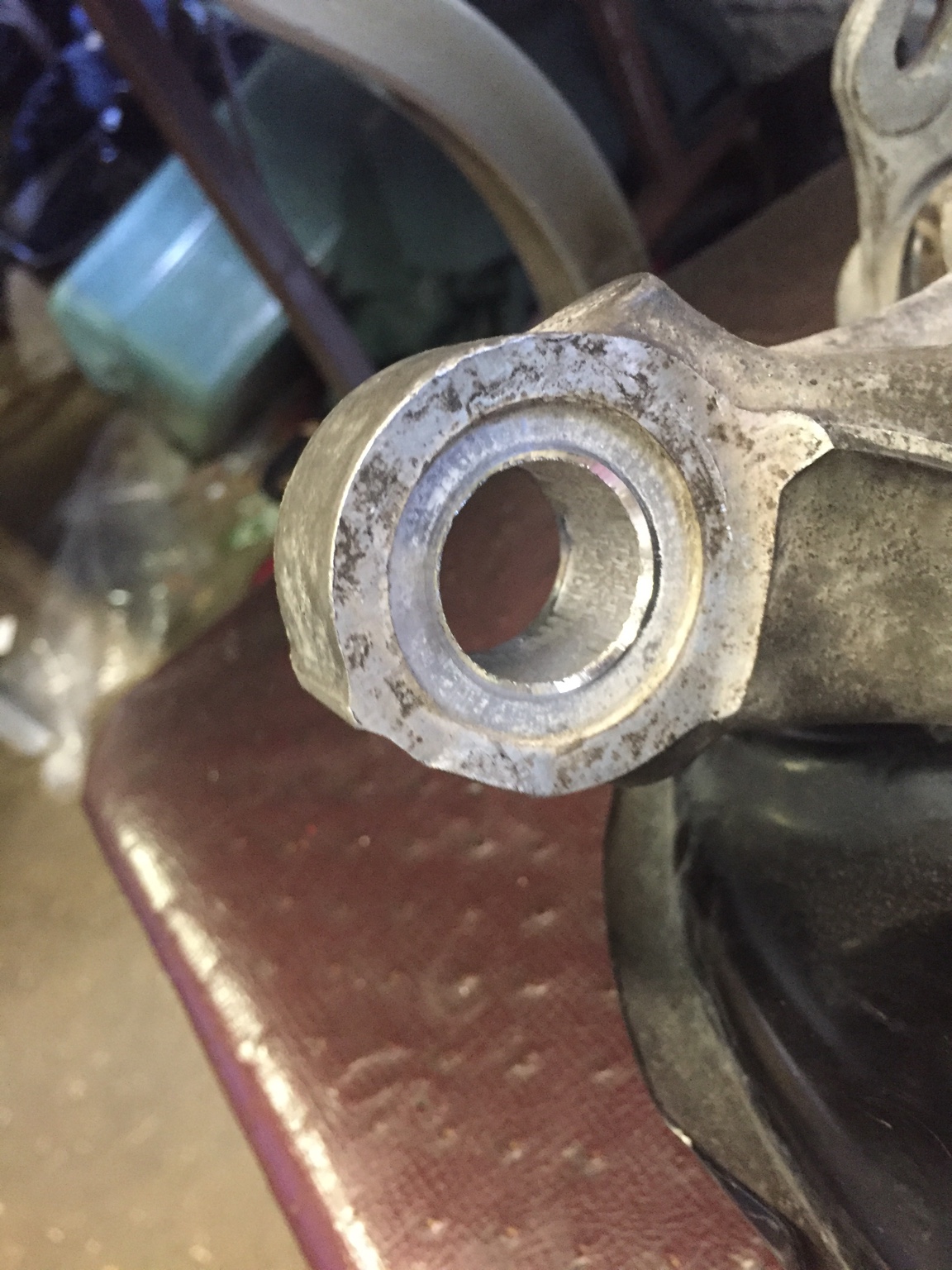 Yes the outer tierod bushing from the Passat Spindle is pressed out, and switched over to the Audi TT spindle.

Before this I even went to get a Audi Q7 outer tie rod, but alas it was to big, so not enough hold to be secure. 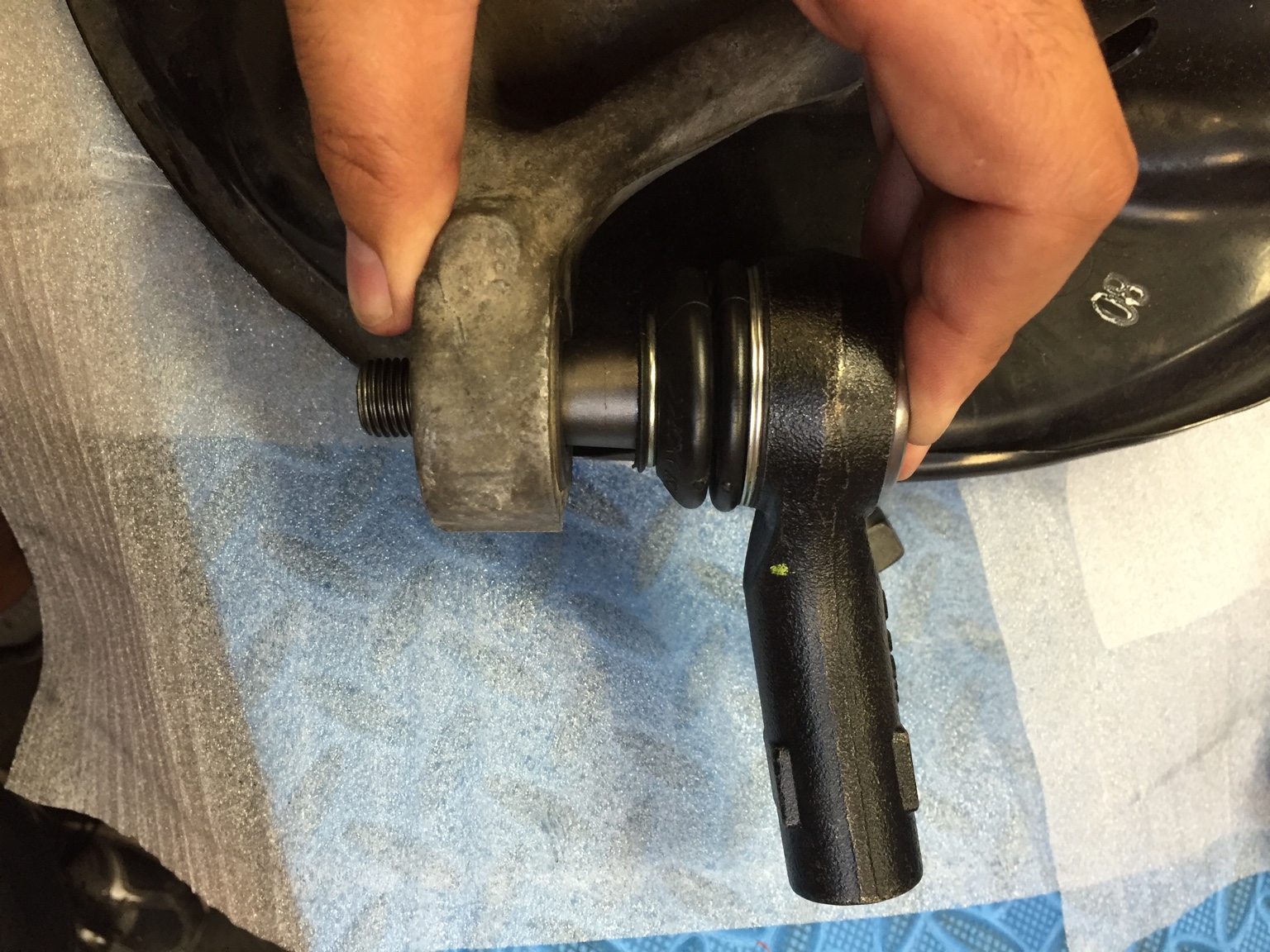 My goal with the GTI has basically been to emulate on a smaller scale the Audi TT VLN FWD which set new benchmarks for what a FWD car could do.

Matching the Audi TT spindles with the 15.6:1 ratio, ends up being probably the sportiest, highest performance combo for our platform.

This should also contribute to lowering the nannies intervention that was somewhat annoying with the Passat spindles combination. More testing needs to be done.

I am now one step closer. 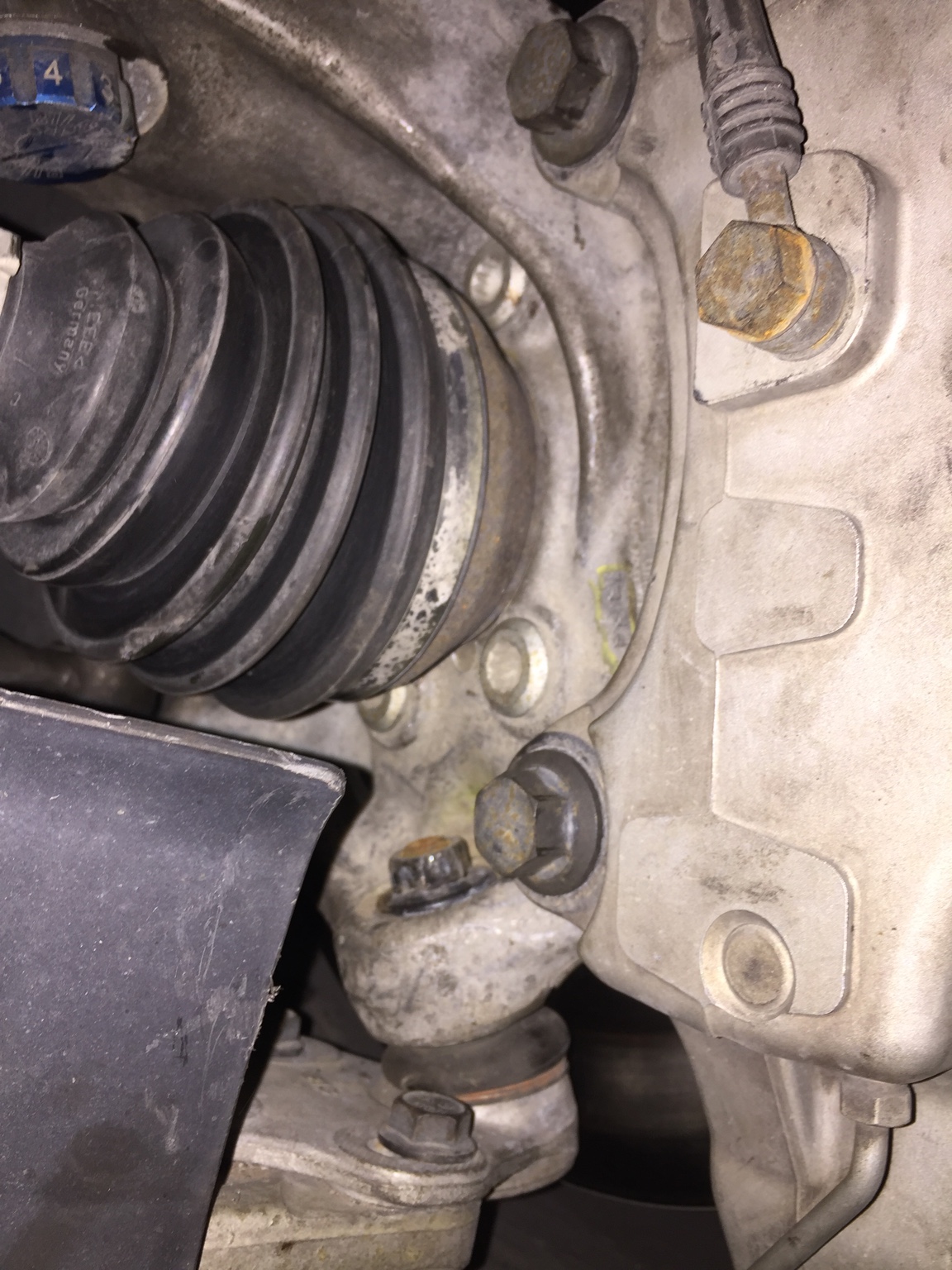 More updates as the new driving season is around the corner.
K

one of my tt spindles came in. i know people have already seen pictures to compare the passat and tt versions, but i'm sure a few more wouldn't hurt. the RH side TT spindle should arrive sometime this week (i bought them from separate junkyards to get the best individual prices). this one specifically is from a 3.2 fwd version, i originally thought it had to be from a ttrs but this confirms that all TT spindles are the same. the superpro ball joint fits with plenty of threads available, so my plan is still to run the TT knuckles with passat control arms and stock steering rack. 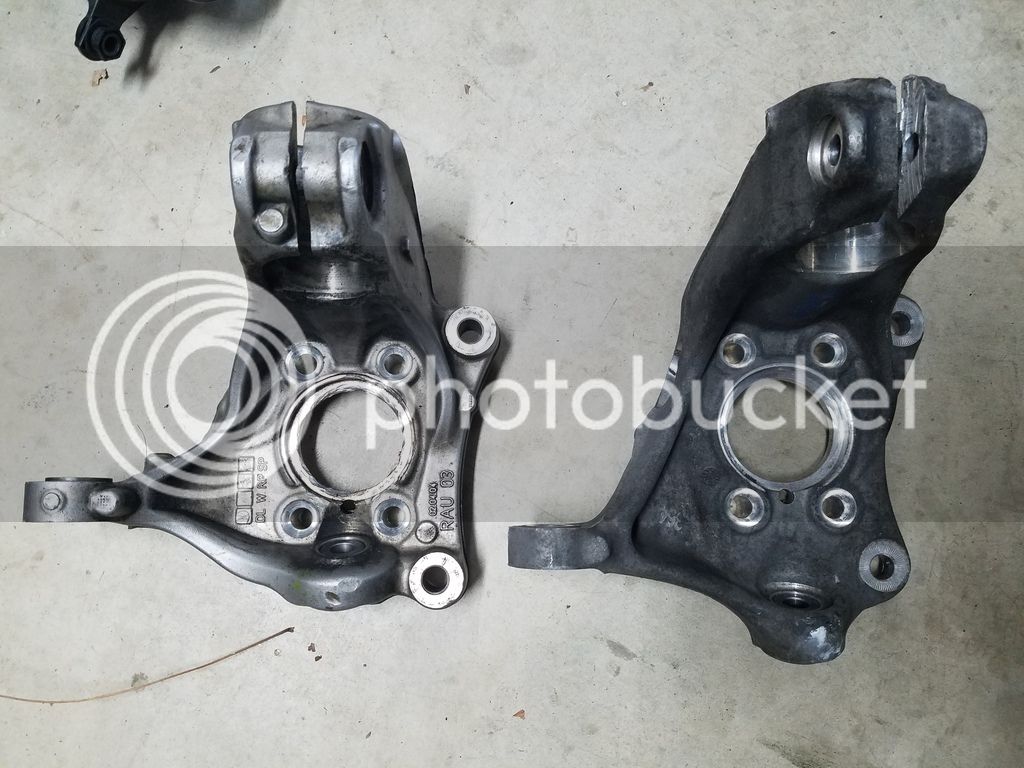 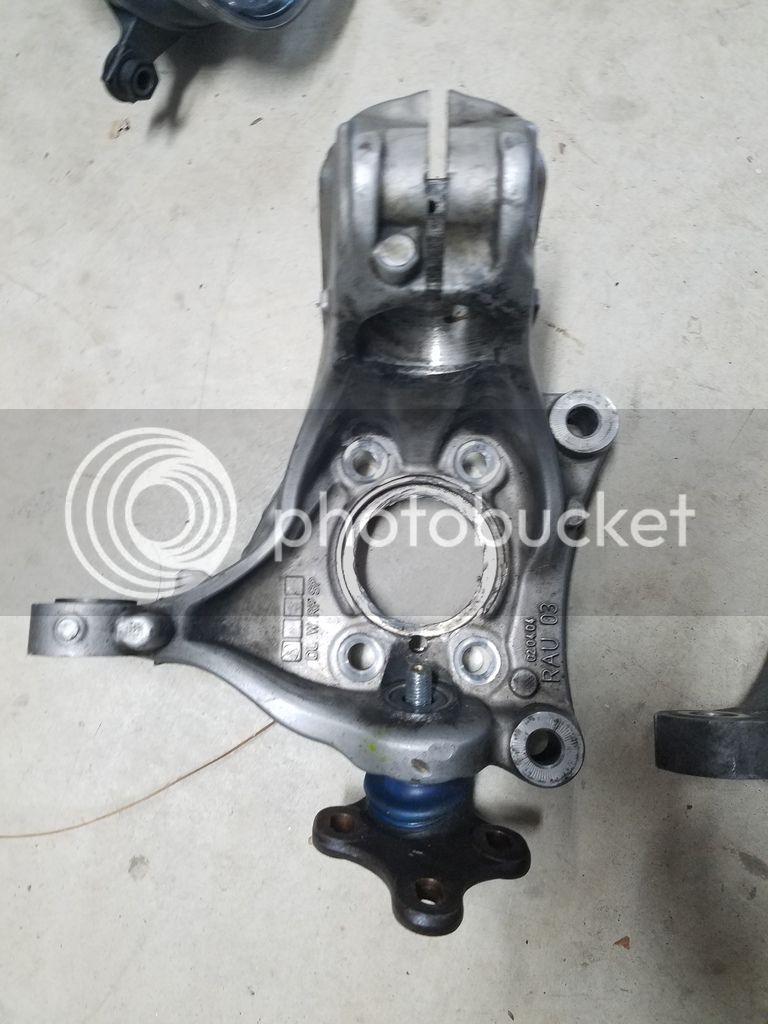 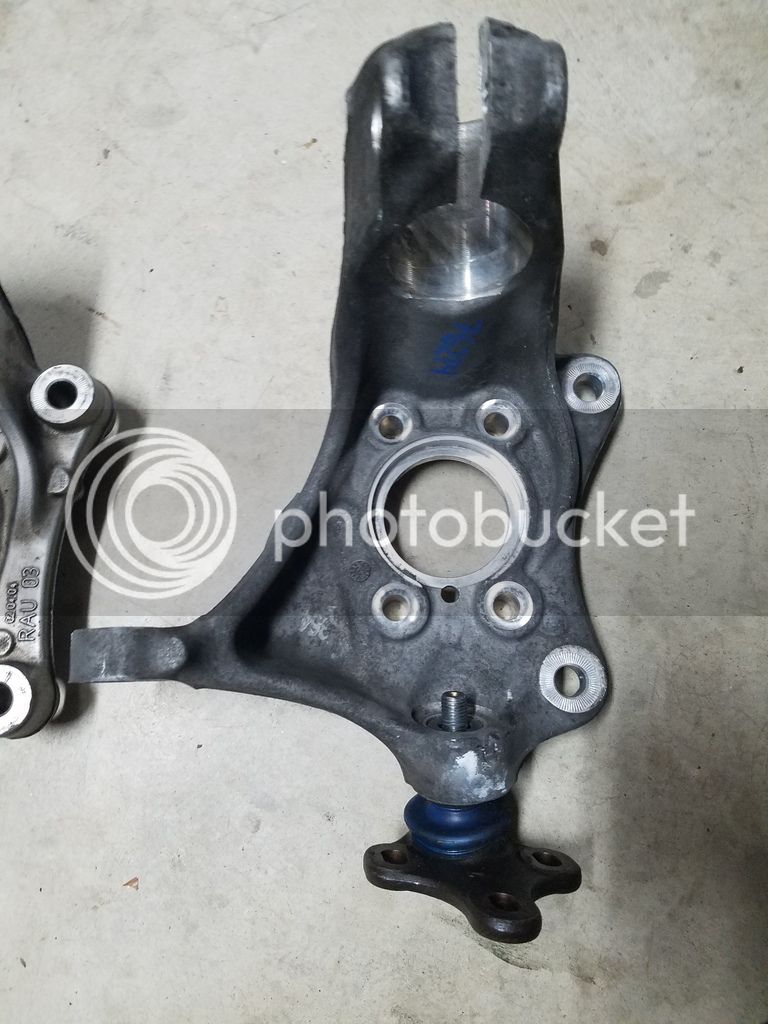 Since you have not mounted them yet, and I should have done it myself when I had them side by side, get some nice side by side pictures to settle the steering arm length. Use a plank that goes from the center of the strut to the center of the balljoint and then a ruler perpendicular to that.
Kind of like what JRutter did.
http://www.golfmkv.com/forums/showpost.php?p=3748797&postcount=37
K

i actually already packed up the passat ones since they are sold. what would i see different than what he found? sounds like what i see, they look the same. i think vw matches the arm position with the ball joint location, and that's why it's lower on the tt spindle.
C

With all the respect to JRutter, his image of the method he measured the arm was blurred.
Nevertheless his finding disprooved the previous info which said that the steering arm of the tt spindle wae a lot longer...2-3 cm longer as opposed to only 2-3 mm as measured by Jrutter.

This wrong initial info was further taken then things like this appeared.

Again this is false... Hence I asked you to show it again that way people know.

This is also wrong:

understood. looking at them both side by side i could see that there wasnt much difference in length. if i can find my stock ones i can measure those to compare. theyre in a box somewhere forgotten.
C

Talguy said:
Real quick question for everyone. I have cayenne brakes on my car and I know that I the TT and Passat spindles won't work cause the outboard caliper mount face sticks too far out. Would it be possible to get it to work if I put a wheel spacer between the rotor and wheel hub on the spindle?
Click to expand...

Audi TT spindles work with the Cayenne brakes. Only the Passat ones don't, without heavy machinning of the ears... which cone people have done....
I run 18z with audi TT spindles. Bolt on.
C


JRutter said:
I went back to get better measurements on the steering arm length, comparing A3 (MK5) to TT (MK2). I get a difference of only 2.4mm rounded up. This is an order of magnitude different from the measurement that everyone has been using! So pretty much no difference between the steering on these two spindles unless this way of measuring is completely wrong...

The geometry of the entire spindle is different, so there are no good reference points to measure from without creating an error due to different diagonals. I created a reference plane by fitting a piece of plywood into the strut clamp, which happens to line up with the ball joint center on each spindle. Then I laid the ruler flat against the steering arm and held it square to the plywood. The ruler is in an archaic measuring system, but the difference is ~3/32" or 2.38mm. 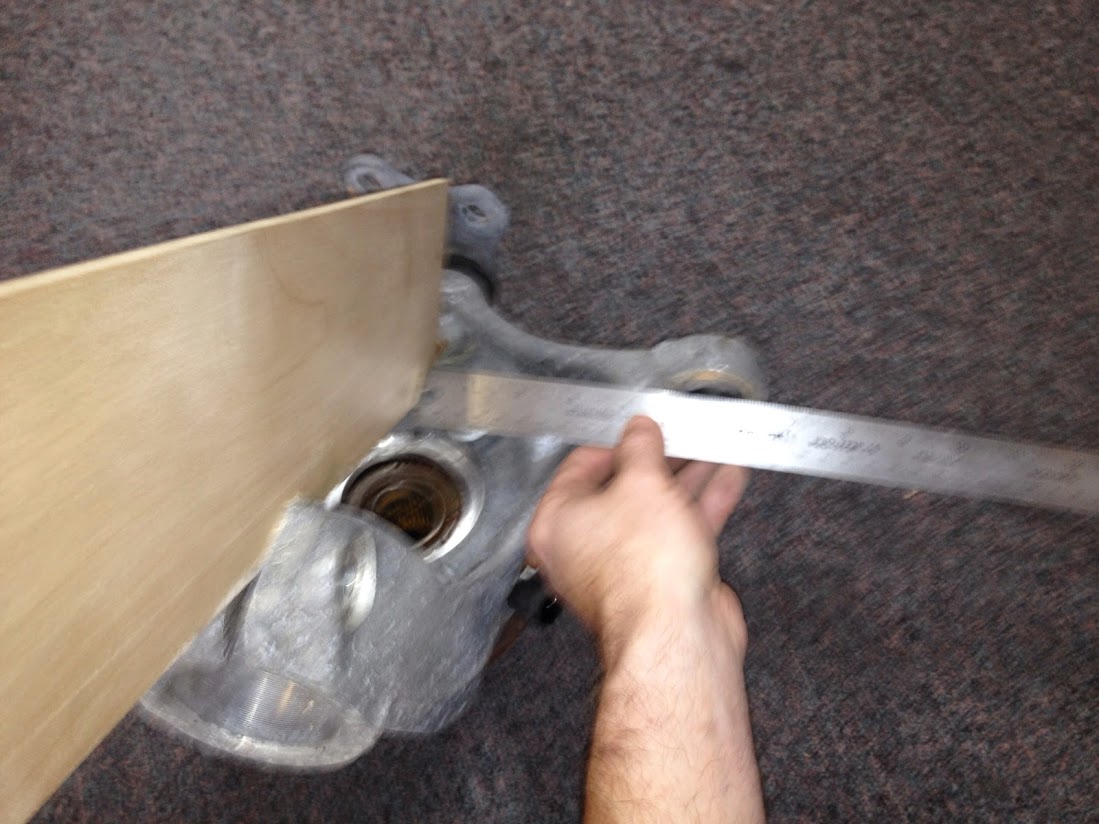 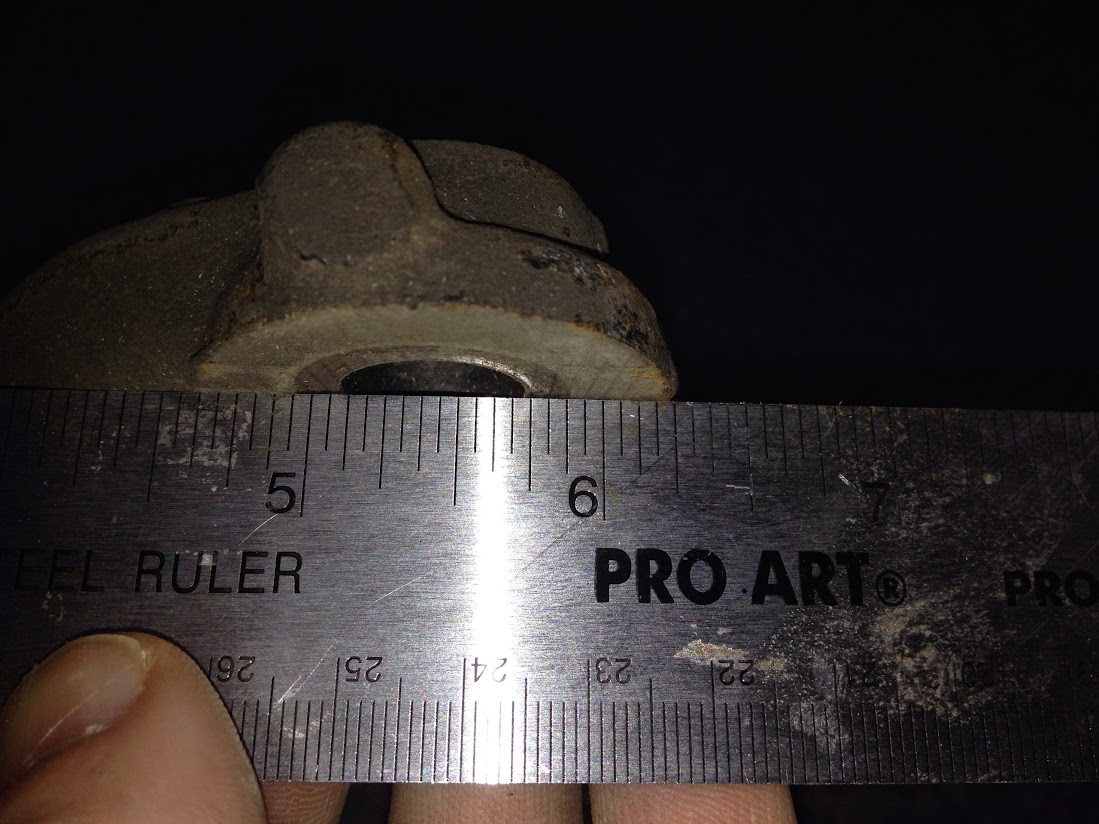 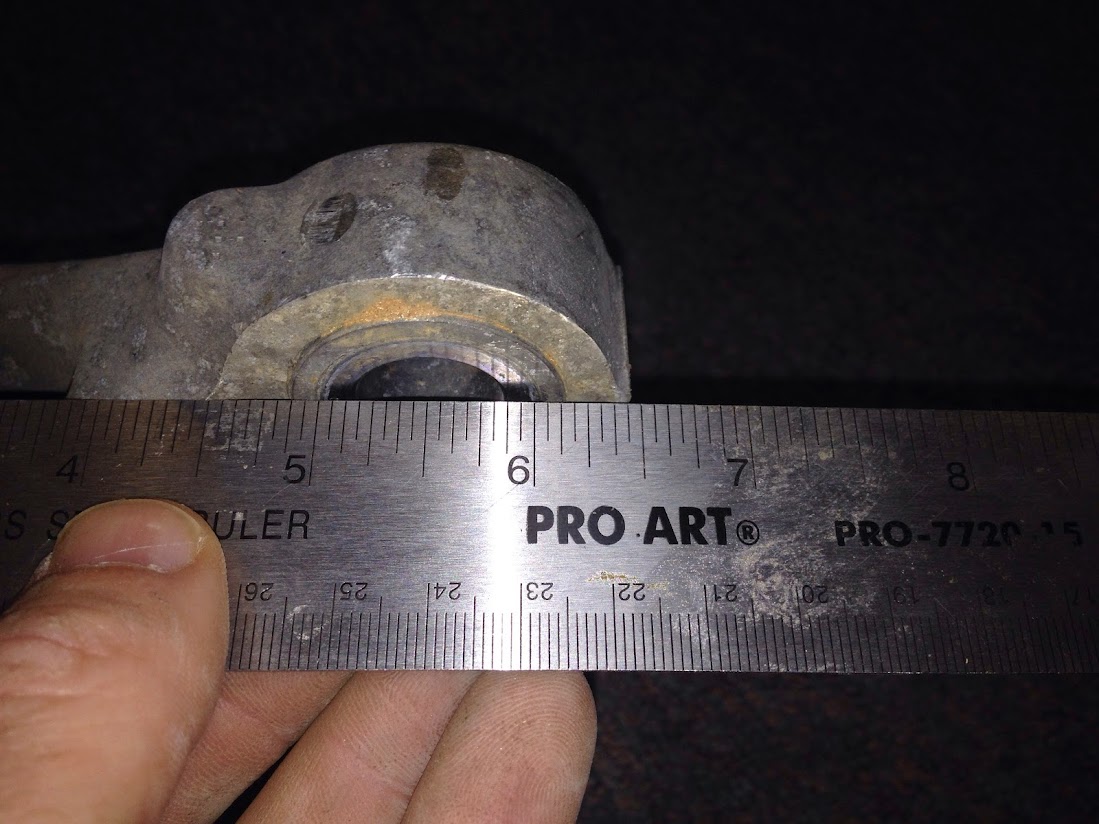 For future reference, Moog has a site where they list all of their inner tie rods by inner thread, outer thread and length. You can find the inner rod that suits your needs:

eurocars said:
For future reference, Moog has a site where they list all of their inner tie rods by inner thread, outer thread and length. You can find the inner rod that suits your needs: