Today I was doing some hard driving, I launched and on my first to second shift it grinded and would not go into gear. I immediately shifted to neutral and then to third, I pulled into my apartment parking lot and realized I could not get into first gear, it would stay in only if I held it in. I finally got it to the point where it would no longer grind/pop out of first gear. Now the shifting into and out of first is extremely stiff both from 2nd and from neutral. It feels clunky or rubbery trying to get into first gear. It doesn't matter if clutch is in or out, engine on or off, in motion or not. Can anyone help?

sounds like your synchro is f'ed
My big turbo and shaved bay build thread: http://www.golfmkv.com/forums/showthread.php?t=151460​
P

yep, hes probably right. You should check all of your linkage first just in case its not. But it more than likely is your syncros amd will have to rebuild your tranny.

I sprayed all the linkage with brake cleaner to decrease it and then applied white lithium grease, this certainly smoothed all my other gears which where already like butter but did little for first although it did help. I did both the linkage under the shift boot and on the tranny itself. Forgive my limited knowledge of a transmissions inner workings but what do syncros have to do with a stationary vehicle with the engine off?

synchros alow the shifter to change gears smoothly inside the transmission. Techinical answer: Gears dont just go together. they have to be spaced envenly and aligned correctly when put together. Synchros do that. Your tranny is still drivable but may grind when putting into gear. Move the car back and forth a little to get it into first when not running and sitting still to align the gears.

Ok, I must have been thinking of syncromesh which no longer required rev matching and double clutching. I had it in my head that syncros allowed the gears to match engine speed, but I see I was wrong.

karl87 said:
Ok, I must have been thinking of syncromesh which no longer required rev matching and double clutching. I had it in my head that syncros allowed the gears to match engine speed, but I see I was wrong.
Click to expand...

That is what syncros do, they syncronize the speed of the input and output shafts allowing you to smoothly change gears.

The issue that seems apparent here though and what most people have an issue with internally to VW transmissions is not actually the syncros themselves. In a way it is the syncros but not really. What you probably are experience is damage to the selector hub which is why it is notchy and grindy when not even moving. If you pulled the syncro out it is probably shiny, new and even reusable (for the price you just always replace it). 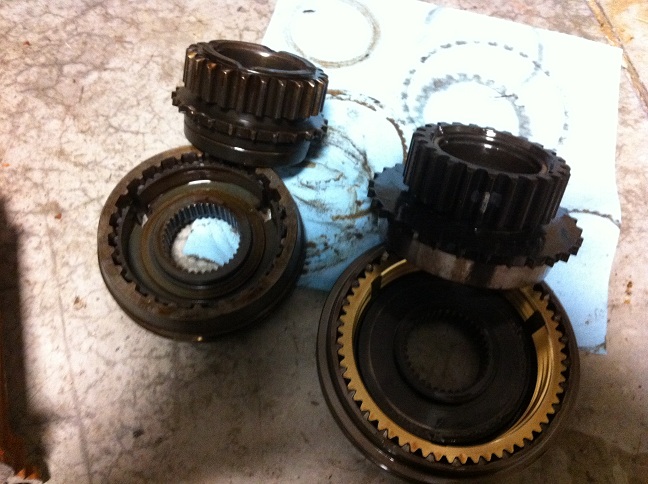 These parts are actually out of a transfer case but they make the point and are similar inside almost any modern syncromesh transmission. I happened to be building a beefier TC for my cummins wrangler last week so had fresh pics on my phone.

The part to the upper left would be the same as a gear in our transmissions. There are two parts to a gear there is the gear that is free spinning and a gear that is fixed, this is the former. When you are not in gear they are still in constant contact however the spinning gear is not locked to the shaft and no power can be transmitted through it.

Then below that you have what would be the same as a selector hub in these transmissions. When you move your shifter inside it moves a cable which moves a rod on the top of the transmission which then operates each of these selector hubs. They are almost always going to be paired in what would a front to back movement of the shifter. So 1-2, 3-4, 5-6.

The selector hub is fixed to the shaft as you can see by the splines in the center of it. There are usually spring loaded tabs that go into the rectangular notches you can see in 3 places on the hub. In this case the older small one didn't have them the new bigger one did. In this sort of application (the transfer case) it is not 100% necessary for a standard transmission it is very important or you could end up with a car in 3rd gear and the hub for 1-2 partially engaging either of those gears. Even if it didn't engage those gears it would most likely grind and cause wear.

On the bottom right piece you see a gold brass ring, that is the syncro. Again looks like that in almost every application. Sometimes there will be a steel ring and then another syncro which VW often does on second gear. Often times a shift into second is the most hasty so they are basically trying to even bring the syncro into speed with the input and output shafts as quickly as possible, the additional brass ring is basically a syncro for the syncro.

Now looking at all those parts notice how they all have on some part of them a similar toothed pattern. Not teeth like on a belt or a gear but either a triangle shape sticking out or a triangle shape cut into it. The latter is hard to see but if you look at the lower right where the brass part meshes with the steel you might notice it. That is really all the contact area there is between the hub, syncro and free spinning gear when that gear is engaged and locked with the speed of the shaft.

Also hard to see in this pic is the shape of those little triangles, that syncro is not flat on the opposite side it has a peak like the roof on a house.

ok google to the rescue for the visual:

oddly yet another transfer case syncro but this was the best pic...

That little roof peak shape is actually what is doing the syncronizing. The selector hub has little peaks just like that lined up so the point of the peak is to the point of the peak on the syncro. However you don't want it to hit peak to peak that as just an explanation of how they work. What you want is those angled sides to slide together. This brings the hub into speed with the syncro and since the friction to the free spinning gear is higher with the syncro then the hub to the syncro it should be the same speed following closely behind the syncro engaging with the hub. The free spinning gear would have little peaked roof teeth also facing the same direction as the syncro.

So what was the point of all this..

If you have regular or constant grinding in just one gear and no issue with the gear that shares the selector hub then chances are you have a problem with the syncro "system" in terms of how it is supposed to function but i would say 9 out of 10 transmissions i have opened that syncro has looked brand new. The hub and the gear though are beat to snot their peaks rounded down to a flat roof no longer able to engage properly. An issue with the syncro not really doing its job but not really a failed syncro.

When you hear grinding its those little peaks just sliding across each other never actually slipping down to either side and locking into place. It isn't the actual gears like most people think because they are in constant contact anyway, the noise is your hard steel gear against the hard steel selector hub.


What the OP is describing since he is having an issue even when the vehicle is stationary seems to be with the hub not the syncros. Missing a gear or even just shifting hard can put a lot of stress on the sliding part of the selector hub. It is a very precision ground piece that is floating on those spring tabs I mentioned and fluid. When you miss a gear though and those roof peaks smash each other that sliding portion cocks and digs into the fixed center part of the hub. Over time this deforms the metal and can jam it up. This will make any gear selection done with that hub difficult and make it apparent at any speed sometimes even engine shut off.

For a repair understanding how all this works can make sense so you know what is all being replaced. If a shop can't show you what is failed take pics and get another opinion. If they are just throwing parts at it find out why. If they are just replacing the syncro even though that can save you hundreds of dollars that day it may not actually fix the problem and the trans will be back out and in pieces within a week costing you double in labor.


OP since you know this happened going into second if this was replaced in the near future you could probably get a way with a 1-2 hub, second gear syncros and maybe not even second gear unless you have been having grinding issues. Let it go too long and it may take out first gear itself but any metal floating around can affect bearings, other syncros (slowing them down so you damage other hubs/gears), and even cause wear on the gear faces themselves causing noises down the road.

The car is still covered by the power train warranty but I am 150 miles from the dealership, I have mods, revo stg2+ and supporting mods, water meth and full mounts. Would it be worth my time and money to let them see the car and risk having to pay for the repair if they decide not to cover it? I'm certainly not rich or even comfortable at the moment.

Getting this sort of thing warrantied is often very difficult.

Not that there are no problems but a warranty covers defects not anything just broken on the car for any reason. If you punch your radio and it doesn't work it's broken but that is not a defect so no warranty. If you miss a shift and now have trans problems it's broken but that does not always mean it is a defect.

The simple fact that you have engine mounts could very easily mean that the shifter is out of alignment which again would not make this a defect but something that was broken by the end user. (note yes i am saying that those of you who install mounts it is a good idea to do a shifter alignment)

None of this is meant to accuse you of any abuse or anything remotely of that nature, just pointing out your grandma could bring the car in bone stock and they would still most likely deny a warranty claim for this type of problem.

I personally would never get my hopes up on any type of manual transmission shifting issue warranty attempt unless it was some well known and documented issue with a particular application, these boxes have been pretty good.
S

i never have grinded a gear before with mine....oh yea im dsg

Would you be willing to link me to the process of aligning the shifter?