The COVID19 SCAMdemic...Gtifan Vaccinates Himself For The Fourth Time This Week Underneath A Bridge - An American Hero

Tongue twister.
"A lot of people criticize Formula 1 as an unnecessary risk. But what would life be like if we only did what is necessary?"
-Niki Lauda

jimlloyd40 said:
And on and on it goes where it stops nobody knows. Or when it stops is more appropriate. 3119 pages and we're pretty much at the point where it started. Zrick has created the perpetual thread.
Click to expand...

New thread title:
Zrick breaks thermodynamics: creates a perpetual thread.
"A lot of people criticize Formula 1 as an unnecessary risk. But what would life be like if we only did what is necessary?"
-Niki Lauda

zrickety said:
I said it before, the thread will end when the fake pandemic ends. Which doesn't appear to be anytime soon.
Click to expand...

Scamdemic onward! (c)
"A lot of people criticize Formula 1 as an unnecessary risk. But what would life be like if we only did what is necessary?"
-Niki Lauda

IanCH said:
You have to be a fuckin rube to think that heart attacks can be caused by a vaccine. There's actual physical evidence of what causes a heart attack, and it doesn't happen over the course of a week or even month.
Click to expand...

Certain poisons induce a heart attack and leave no trace, makibg it look like a random heart attack.
"A lot of people criticize Formula 1 as an unnecessary risk. But what would life be like if we only did what is necessary?"
-Niki Lauda

anotero said:
Certain poisons induce a heart attack and leave no trace, makibg it look like a random heart attack.
Click to expand...

The blood curdling scream my GF gave tonight almost gave me one. I almost tipped the couch jumping up to get to the kitchen. It was a cockroach. I almost ate shit getting off the couch over a cockroach. We've been together for nearly ten years...I've never heard her scream like that before.
U

cb1111 said:
Unfortunately, those stats aren't accurate and, even if they were close, speak only to fatalities

and not to illnesses. From the same article:

The existing data don’t allow us to conclude that the Delta variant has a lower CFR than the wild-type virus. Amesh Adalja, a senior scholar at the Johns Hopkins Center for Health Security, explained in a PolitiFact fact-check that “All variants are going to have a lower case fatality rate, because a significant portion of the population, especially those at high risk for death, are fully or partially vaccinated”.

The claim that the CFR of the Delta variant is 0.08% is misleading, as this value varies greatly depending on the age of the population and its vaccination status. To put this in context, according to the latest Public Health England report, the CFR for the Delta variant is 1.9% for people over 50 years old. The video published by Dan Bongino didn’t explain this, leaving viewers with the false impression that the Delta variant is less deadly than the wild-type virus.

What is obvious is that vaccination is your best route from preventing severe illness and death.
Click to expand...

They are accurate, your own source says they're accurate. Their only contention is that the figure is misleading on the sole basis that it's the overall rate as opposed to a breakdown by age or vaccination status. So for those vaccinated .08 drops to .02 (or lower). For those over 50 it increases to 1.9. No shocker, risk always increases with age. Still, .08 is an accurate overall rate for those unvaccinated. But, that isn't scary enough so they have to editorialize.

Which is inflated because 39% of those patients were in the hospital for reasons not related to Covid and just happened to test positive. I guess it's part of their routine to test all patients.

Those are the numbers and I'm sorry but I don't see how your source refutes any of that.

This makes sound scientific sense: Evolution favors variants that are more contagious — but also ones that are less deadly because killing the host reduces the chances for spread.
Click to expand...

J&J shouldn't even be in the discussion anymore. It's crazy they're even allowed to make vaccines when they can't make lotion or baby powder without killing people.

These are great days bros, SCAMdemic onward.
Is the truth, enough for you to believe?

jimlloyd40 said:
And on and on it goes where it stops nobody knows. Or when it stops is more appropriate. 3119 pages and we're pretty much at the point where it started. Zrick has created the perpetual thread.
Click to expand...

You really give Rickety too much credit.

A one sided tug of war is just pulling a rope down the street.
Is the truth, enough for you to believe?

1L19 said:
If he does then it's even worse in this thread. That means it's not him.. it's y'all. Beating your head against a wall that you know won't crack day in and day out for 3121 pages... and you still aren't bored. Hey... some folks like watching the cars rust... to each his own.

(He doesn't mean it. You can tell from the title changes. He's a clown/comedian. Look at me!)
Click to expand...

It isn't this serious.

cb1111 said:
Total whack-a-doodles but, like zricky, they have a following and spew enough crap that sometimes sounds plausible (until you check to see that the atributed quotes or data aren't there.

The danger - and we see this here - is that it causes doubt for people like Unreal1 who undoubtedly thinks "there has to be something to this" - not realizing that everything coming from these guys is absolute and total shit - and now very dangerous.

And yes, I'm livid because this has gone far beyond a joke at this point.
Click to expand...

Haha, oh boy. You know I think it is rather arrogant to think anyone has that great of influence over another in a car forum to sway them to or from a personal health decision.
Last edited: Jul 22, 2021
2016 2 Door S PP/LP 6M

my glass is half full of empty

zrickety said:
Lookup the data...especially UK and Israel. They are not skewing it like the US. Data supports everything I've been saying, the vaccine is useless. Worse yet, it's counterproductive.
Click to expand...

Just another day in the rickety household: 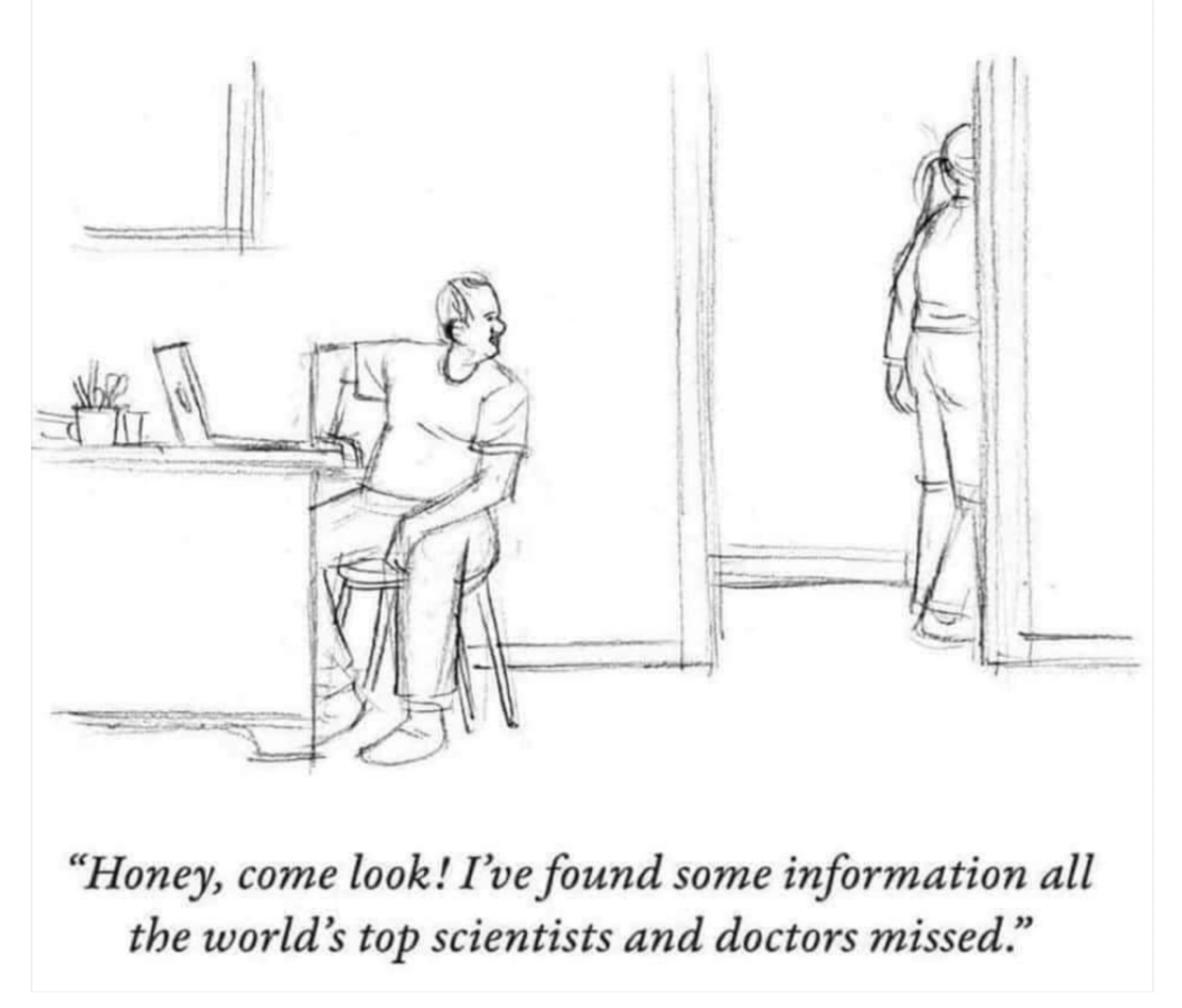