Are you running two piece rotors?
Click to expand...

Das Gespenst said:
Perpetuus, you may want to drop and reset your subframe, that's why your stearing wheel is so off. Even if you get an alignment to fix the steering wheel position, your geometry will be off. Try loosinging all the subframe bolts (without pulling them all the way) and getting it to a more neutral position. Also, I'm sure you know, but all of those bolts are one time use stretch bolts. They need to be replaced everytime you pull them.
Click to expand...

I am going to try to redo the lower control arm bolts at the pivot point. In the repair manual, it says to tighten them in curb weight position -which I did, but maybe it was not accurate enough.

I have the Tyrolsport subframe collars previously installed (partially- 4 of the collars only), so there isn't much slack in the subframe positioning at all.

Lol. So I went back to redo the control arm pivot bolts more carefully.

The result? The steering wheel is now crooked to the left by 45 degrees (instead of to the right by 45 degrees). Before tightening up the control arms, the control arms can be easily wiggled in and out (toe-in or toe-out). It looks like there is a good 5 to 7 degrees of allowable tolerance.
Öhlins | H2 Sport | Wagner Tuning | APR | AWE | VF Engineering | O.Z. | Wavetrac | VW Racing | H&R | Unitronic 2+ | DLI Teknik

Ouch, lol. I wish I still had the room and tools to wrench on my own car.

At the same time, it's nice to drop t off and come back and drive off too, haha.
BECAUSERACECAR​
MKV R32 Build Thread​

I almost went ahead and bought new spindles and control arms, but it didn't make sense after I rationalized it a little. If the spindles or control arms or spindles were bent, it shouldn't have affected both front wheels by equal amounts (1/2 a degree each). I attempted to install the Tyrolsport collars for the subframe before, but couldn't align everything up. It ended with me installing collars for just two bolts. Heck, I even bent two of the collars the first time when I forced it without 100% lining it up first. Tolerances are tight!

Anyway, my guess is that the subframe must have shifted to cause the imbalance in camber.

So, it was a big day today. I went ahead to drop the subframe and install the remaining Tyrolsport collars I missed before. Since the subframe was dropped, I thought to install my VWR swaybars at the same time for less hassle. These swaybars were bought almost a year ago too.

I found that almost every single bolt for the front subframe had to come out for the swaybar to be removed (like the last time I did the install). The only bolts that were left untouched were the control arm pivot bolts. Actually, with all the bolts out, it was significantly easier to push/pull the subframe every which way to line up the collars slowly. It was not easy to line everything up, but I started with the control arm rear bracket 18 mm bolts first, and left them partially installed so that the collars were properly seated (but not tightened up all the way). I repeated this step for the two stainless steel ARP bolts that replaced the black bolts at the rear of the subframe (also 18 mm). With everything loose, it was at least easier to push/pull on the brake rotors to align the subframe. What also helped was putting a jack close to the bolt I was working on, and gently lifting the subframe with the jack while I wigged the subframe in small amounts to get the collar to line up.

With the subframe lowered, there was not enough room to manevour the swaybar out until the front subframe horns were free. The subframe "tray" itself is not bolted up in this picture. 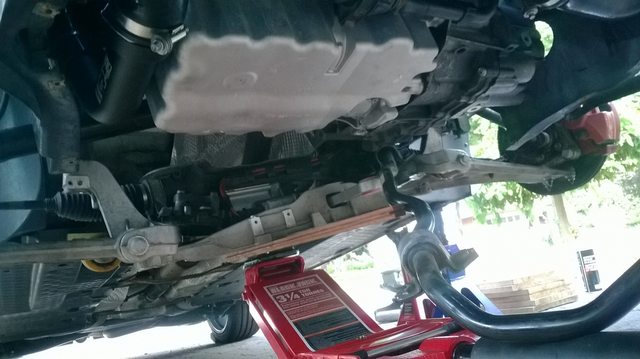 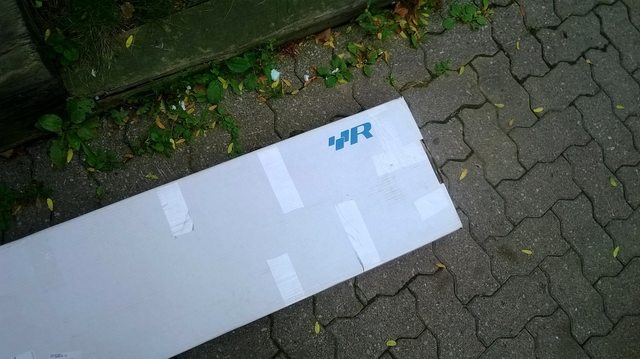 Front swaybar, old vs. new. The reason I went with VWR is because they are 3 way adjustable, and only mildly stiffer than stock. I don't like swaybars, but at least this way I can tune the balance of the car sacrificing suspension independence too much. 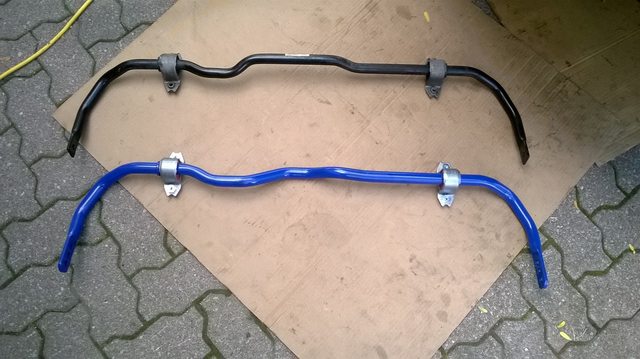 Front swaybar installed. I put some tape over the swaybar before fitting it on the car. This helped prevent the paint from chipping off and eventually leading to rust. 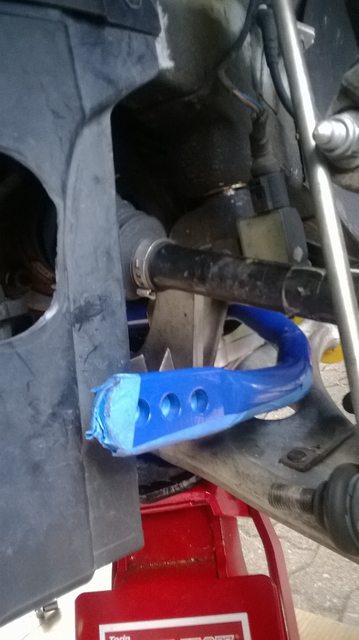 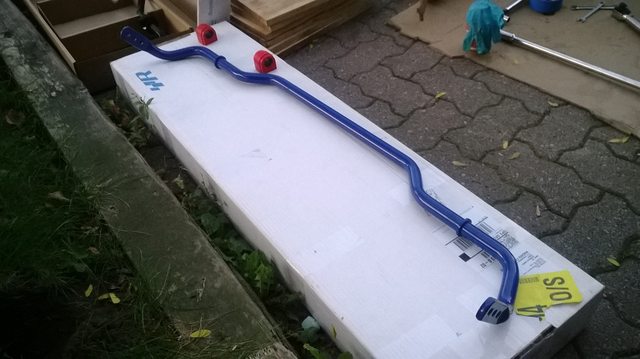 ARP bolts (on right). Delicious. They are only a 14 mm hex drive, but were to be torqued to 90 lb-ft. This is basically the same torque as the lug bolts! 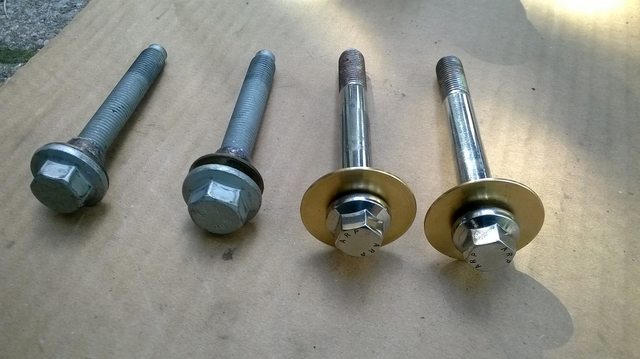 Also, installed some new rear rotors yesterday. They did not come off without a fight. I used a gear puller to pull the rotors off, and when it was free, it came flying off and landed almost 10 feet away. 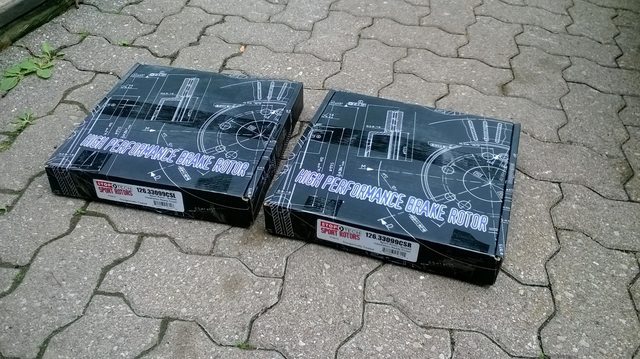 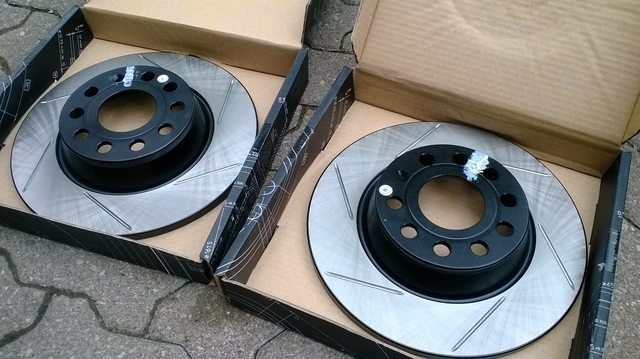 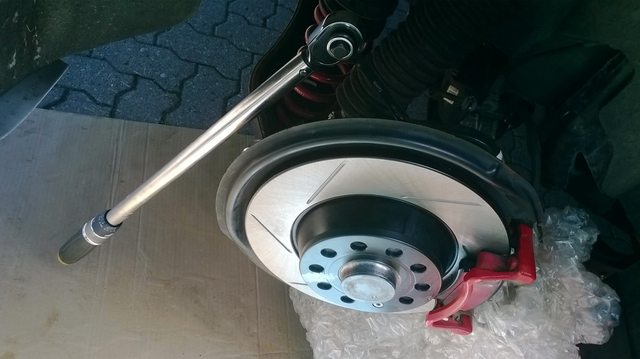 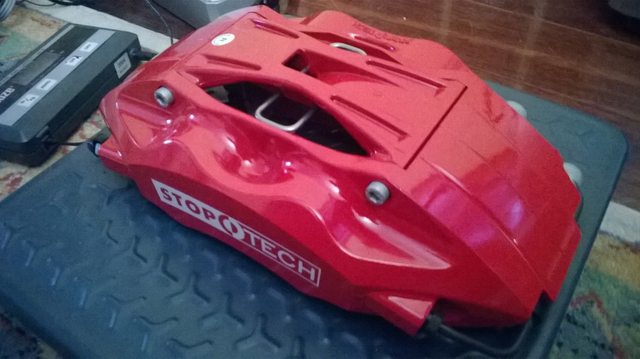 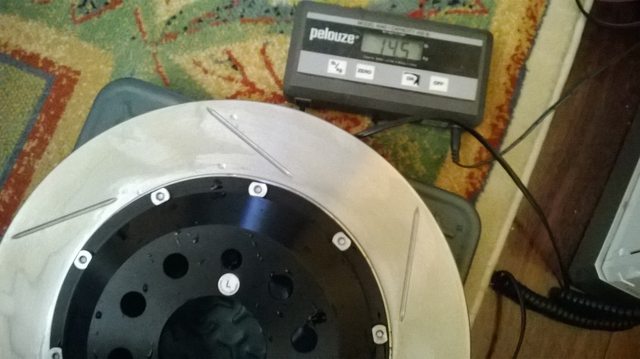 Wow, that's a light rotor. Are the calipers you're running 8lbs as well?

I'm looking forward to your impressions of the sway bars. The guys I autocross with have been recommending a rear bar. I probably won't get around to it next summer though, maybe the following year.
2008 GTI Build Thread
Volk Racing | StopTech | HPA Motorsports
KW Suspensions | Whiteline | Integrated Engineering
​

SuperSkyline89 said:
Wow, that's a light rotor. Are the calipers you're running 8lbs as well?

I'm looking forward to your impressions of the sway bars. The guys I autocross with have been recommending a rear bar. I probably won't get around to it next summer though, maybe the following year.
Click to expand...

Yep, calipers are 8 pounds. Well, actually, my scale shows 7.5 pounds, haha.
Not sure if your scale is accurate to 0.5 pounds, but I am going to say that our calipers are effectively the same weight. 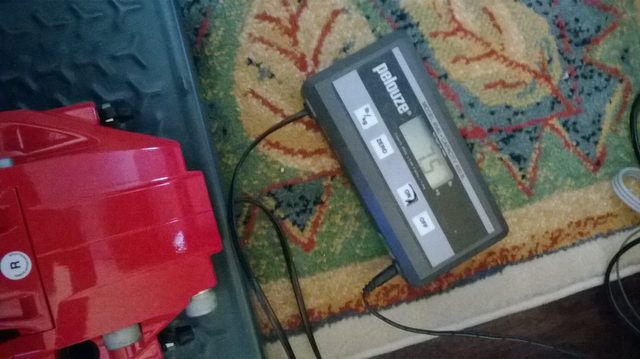 By the way, I am not completely sure how tight to install the caliper carrier bolts for the stoptech carrier. The installation instructions are generic for mk4 and "later model" VWs, and specify 80 - 90 lb-ft.

But, I know for a fact that they should be roughly 140 lb-ft for my B6 passat spindles when running the OEM setup (which is higher than for GTI stock spindles).
Öhlins | H2 Sport | Wagner Tuning | APR | AWE | VF Engineering | O.Z. | Wavetrac | VW Racing | H&R | Unitronic 2+ | DLI Teknik

Ya, I'd say they're the same. My mechanic had a scale lying in his shop that I used, it could display half a pound but who knows how accurate it is anymore.

I think I have the same instructions too, mid-90/'s and later VR6 VW's with a picture of a MkIV Jetta on the front. It says 85-90 lb-ft. If you're supposed to torque the stock brakes to 140 lb-ft with the spindles though I wouldn't feel comfortable at the lower torque. I can't think of any reason it would damage the brackets, if anything I'd think high torque would damage threads but the spindles are rated for it so that's no concern, you have the higher compression on the brackets but I'd hope that isn't going to cause issues.
2008 GTI Build Thread
Volk Racing | StopTech | HPA Motorsports
KW Suspensions | Whiteline | Integrated Engineering
​

Took my time today to slowly install the big brake kit. The calipers are such a vibrant red that they really stand out. They are very well designed too- just two bolts to remove the caliper bridge to change out the pads.

The Torx 30 bolts holding the original rotors had to be drilled out and retapped. Easier than I imagined. 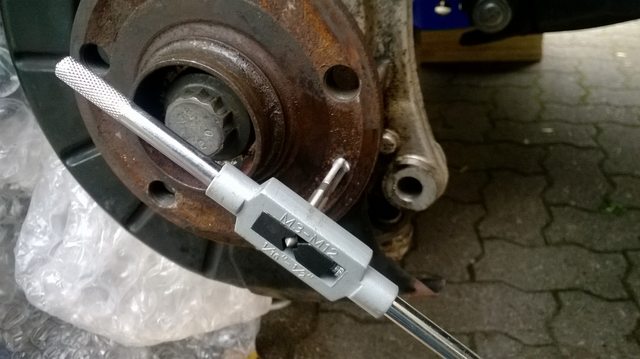 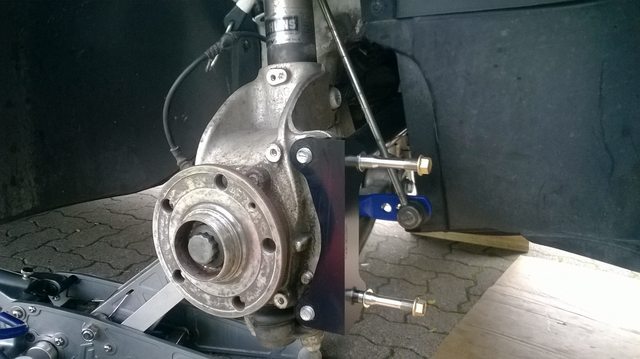 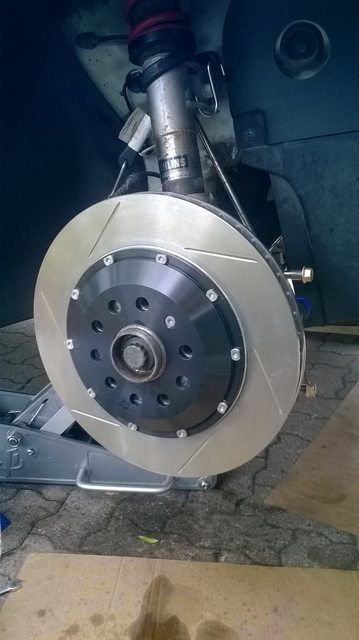 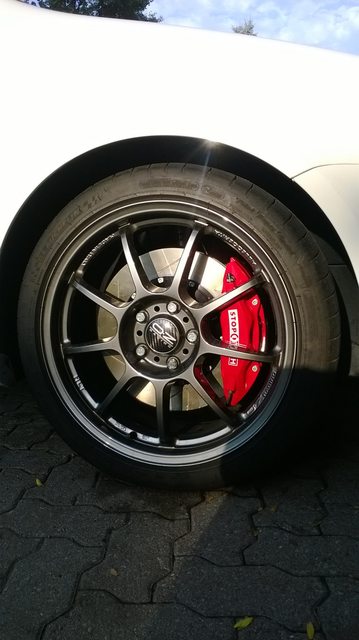 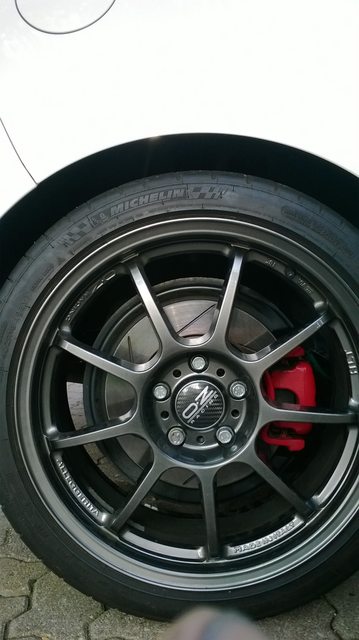 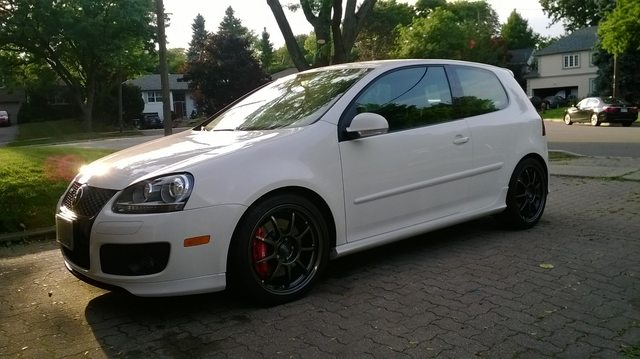 The previous Passat alu. spindle I bought from the scrapyard turned out to be crooked when they removed it from the car (they didn't have the strut spreader). There were impact marks from the hammering that they did. When I tried to slide it onto the strut, there was some resistance due to it being crooked.

I decided it wasn't worth my time or energy to keep guessing on whether the spindle is straight. Bought a brand new one instead and also no longer have to replace the stretch bolts for this installation.

And this is now the second time I've learned I could have run the stoptech brake kit up front. Could have bought an ST4O kit for $700, fml.

Glad to see the car is still coming along and you're still going at it! How does it feel with everything you've done now?
Daily build (09 GTI)
http://www.golfmkv.com/forums/showthread.php?t=195895

xSabretoothx said:
Glad you're still at it. Did you pick up the control arms too?
Click to expand...