(Note to Mods: Wasn't sure where to put this. It has some semi-DIY elements, as well as interior and exterior technical stuff... in the end, because there are a lot of pictures, I put it in here. Feel free to move :biggrin: )

As I approached my 60,000 mile marker (and end of warranty) and to celebrate my new job as a power electronics engineer, I decided to splash out on my baby a little...

1)Boost gauge. I wanted a boost gauge, and I wanted one of the best available. After hunting around, there was only one serious contender - DEFI. To that end, while I was in Singapore, I purchased a Control Unit II and a Defi Gauge BF turbo gauge in blue: 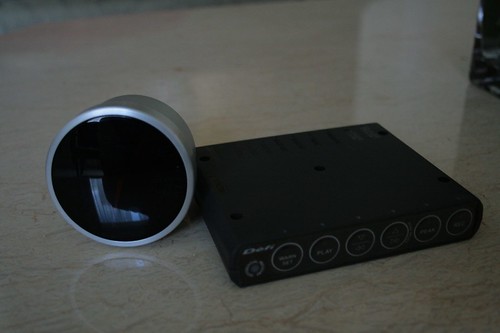 With regards to mounting of the unit, I spoke with Riso of OSIR design about making a gauge pod - however, I did not agree with his placement of the unit so decided to mount it where I felt it would be best placed, which is on the central vent thingy. To mount it there would require fairly heavy disassembly of the dash, so before I installed it I also acquired...

2)DVD Navi system. I'd decided to upgrade my OEM CD MFD2 to the DVD variant, as I travel to the continental EU reasonably frequently and was fed up with changing CDs. I acquired a unit for a decent price and was ready to take apart the dash and install both items. However, there was one final thing to be installed...

3)Pogo Alert Speed Camera detector - my old Road Angel II had given up the ghost, and I wanted a replacement. I found this unit - small size with a nice colour screen, large font to easily see speed and camera alerts. Customisable colour too, so I could change the background to match the exterior colour of my car!

Unfortunately, I didn't get any pics of playing in the engine bay... essentially, as I have the forge DV, I link up the DEFI boost sensor using a short piece of vacuum hose to the Forge multitap, and then attached the boost sensor with a bolt to the plastic battery tray. I then ran the signal wire through the firewall where all the other cabling goes (if you've done a boost gauge install, you'll know what I'm talking about). I disassembled the entire centre console and took out my old satnav: 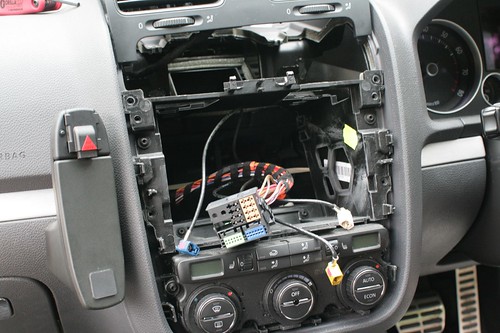 This was a very easy process and took only 15 minutes. I then set the old unit carefully to the side: 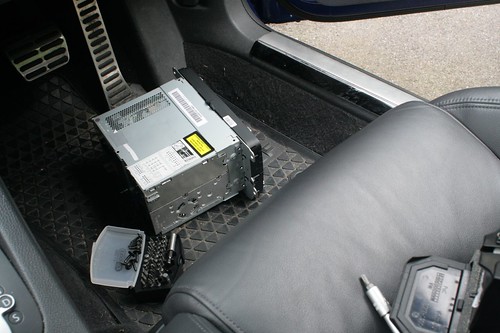 As I had to route cables through to the centre, I took apart the lower side of the passenger side (left-side) dash, and ran the DEFI sensor cable through the centre part and out underneath the driver's dashboard. I'd already decided I wanted my DEFI-link 2 out of the way and under the driver's dash as placement in the centre as others have done prevents use of the ashtray (cointray ). This will make more sense shortly.
I then ran the signal cable that goes from the DEFI-link 2 from the same under-foot location up through the centre console: 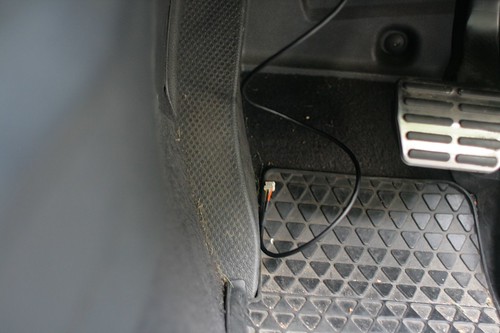 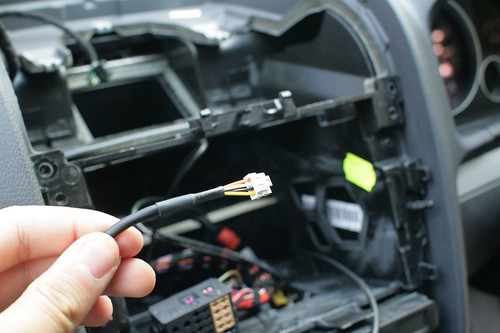 The central mesh is easily replaceable should I want to return the car to stock at any time, and I was going to mount my gauge on it. I drilled a small hole in it to allow access to the cable: 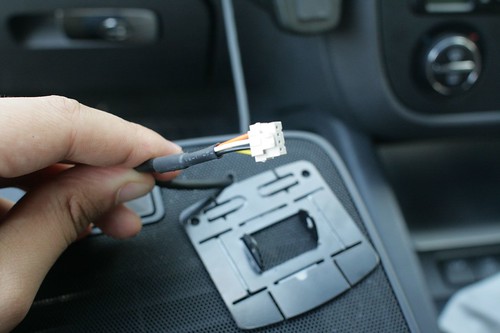 Once I was done with this, I connected up the DVD satnav, screwed it into place and fired it up: 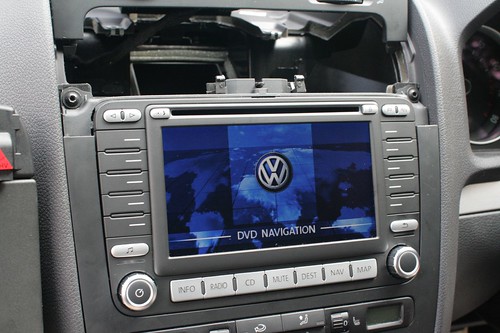 Then I closed up the centre console: 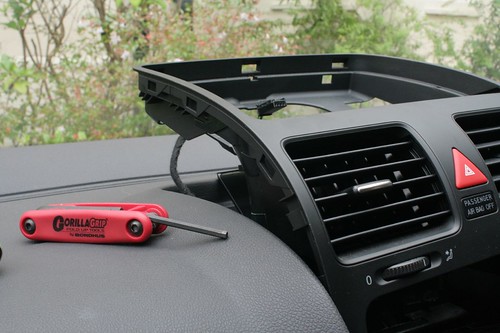 I attached the DEFI gauge cup with the included stand to the top of the mesh, routed the cable through it and then connected the gauge. With a bit of fiddling and wire adjustment I got the top mesh to then fit snugly down, and tightened the screws to get rid of any rattles. The central console was now complete! 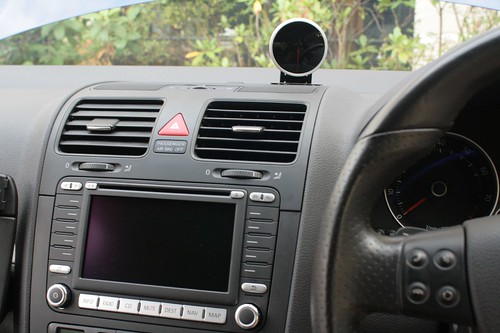 I then attached the Control Unit II to under the driver's side dash: 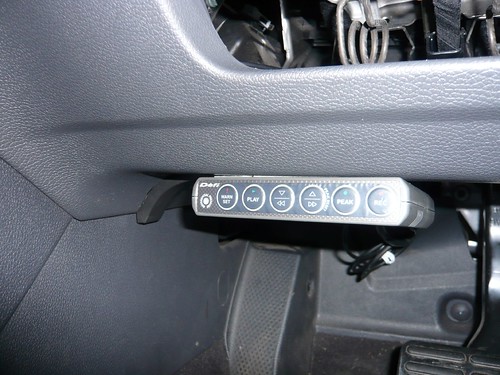 Now what I needed to do was to find power for everything...
The DEFI unit wanted a 12V constant, 12V Switched, and 12V light (as well as ground of course). I wanted to hardwire in the speed camera detector as well so it would turn on with the car -the Pogo Alert unit wanted 12V switched therefore. I probed the fusebox with my trusty multimeter and found my 12V constant and 12V switched supplies, and use a pair of pass-through blade fuses with the appropriate wires connected to them. I decided to keep my DEFI light on all the time (I always drive with my sidelights or low beams on), so that could go into 12V switched. I got a cigarette lighter cup to fit the Pogo's cigarette lighter plug, and put a fuse in line with the 12V constant for the DEFI (the cigarette lighter plug, connected to 12V switched, already had a fuse inline): 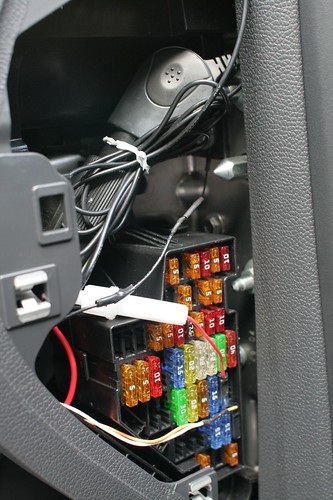 
So did it all work? 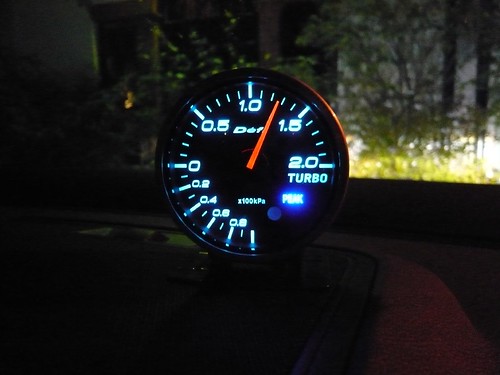 Still more to come though...
The DEFI control unit comes with a white backlighting as standard: 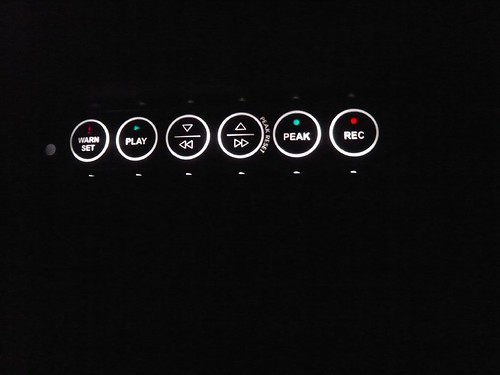 2 days ago I decided I didn't like that so disconnected my unit, and swapped out the white LEDs for red ones that are the same as used in the car! Looks much better now 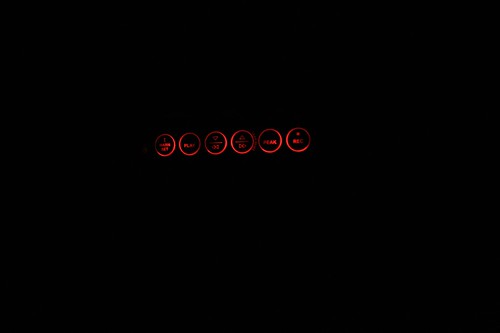 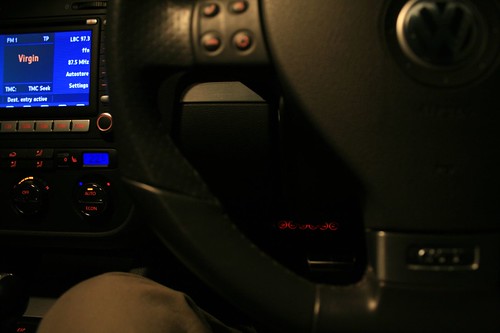 I would not recommend this mod for anyone else though unless they have serious surface mount (802 or smaller) experience! You cannot stick in a regular through-hole LED!

The colour matching of the DEFI gauge is not identical, but it's not bad. I've thought about changing the LEDs in that as well, but it will be harder as the DEFI link is a solid-state unit with no moving parts, whereas the gauge is a calibrated stepper motor unit that I don't want to break.
What's the Pogo look like, I hear you ask? Check this out: 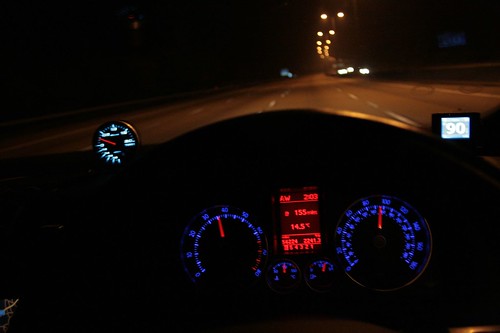 Pogo is the unit to the left showing speed colour is a pretty good match to the interior (though it's a bit washed out in that pic). But that's what my dash looks like now and I'm pleased!

One last thing to go now though... look what just arrived in the mail today: 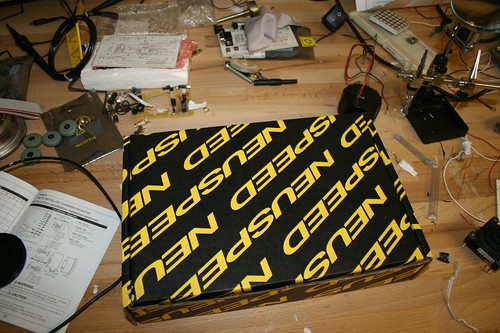 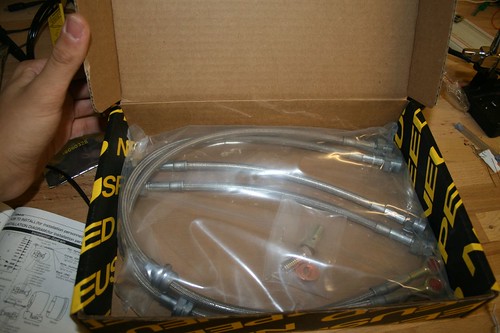 I'll be putting those in tomorrow morning...
I've been doing this update over the course of about two months now, and I'm pleased with the way things are turning out. There's not much left to come now, a Eurojet turboback exhaust (coming courtesy of BSH) and PCV fix, and possibly and Oil pressure DEFI gauge (now I've got the control unit...)

Sorry for the long post, let me know what you all think! 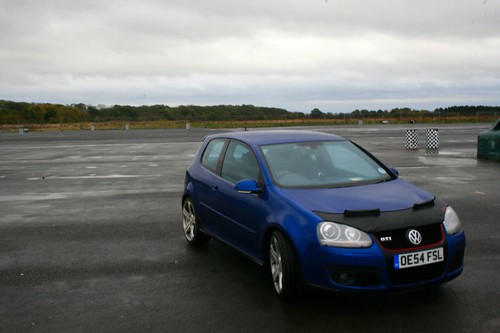 The best boost gauge money can buy...I love it, but dang it's expensive.
Gabriel
http://burntgauge.webs.com/

that color is so amazing, i wish they had that for GTIs here!

what does the control unit do for the DEFI gauge?
:happyanim::happyanim:
​

@GTI Trojan, rather than a vac line go straight from the boost tap to the gauge, there is an electronic sensor placed in between which send signals to the control unit. Any other sensors I get (Oil pressure, exhaust temp, etc) also plug into the control unit. The control unit sends a signal to the gauge plugged into it; if you get any further gauges you can "daisy-chain" them, plugging each successive gauge into the previous gauge and they'll all run.
Makes wiring a lot neater as you don't need lots of cables going everywhere, all sensor wires go into the control box and then one single gauge wire to wherever your gauges are. It also has a memory and can record/playback 3 minutes of data on the gauges, store peak values, have a warning level set... it's pretty cool.
DEFI has a little diagram which will explain the daisy chaining thing:

The Defi setup is pretty nice. Can it also run a wideband o2 sensor?

Don't believe so, here's the link to the available types of BF gauges:
http://www.nippon-seiki.co.jp/defishop/product/bf/bf_type.html

cmdrfire said:
Don't believe so, here's the link to the available types of BF gauges:
http://www.nippon-seiki.co.jp/defishop/product/bf/bf_type.html
Click to expand...

Kind of a letdown... though the EGT meter would be nice to have.

To the OP: Very clean install though. Glad to see you're putting that degree of yours to use :thumbup:

the navi is awesome but I like the bosst gauge installed in the vent , looks better

As a bonus, now now get to call your car Hal.

nice neo! but shouldve done it all before the oxford meet!

not rubbing.. yet :wink:

bennylenny88 said:
nice neo! but shouldve done it all before the oxford meet!
Click to expand...

Was all done before the Oxford meet benny, Lee had a good look at it all and wants one on his car now :biggrin: you should've looked a bit closer!


@Sloppy - heh, didn't think of that... now you mention it though, car has been acting very "independent" of late