Hello and welcome. Introduce yourselves here

What got you into VWs? What do you drive? What do you hope to buy? Option Spec? Anything on-topic or just say Hi


Both my parents had VWs when I was younger and so I always wanted a black or Red 4-door GTI...but got a little lost along the way because my Grandpa was into Audi.

I finally went looking for a MKV in June 2009 due to MY2009 clearance discount prices, but the dealer could not find a Tornado Red car fully optioned out with leather and sunroof in Canada...there were lots of black and white cars at the port though. Production had already ended...so cars were no longer arriving from the factory.
So, I then put my money towards a MY2010 sight unseen and hoping the base price does not sky rocket.

After 4 months of waiting, my ride arrived.

I am not big on mods and love stock looking clean cars...but my wish list is below.
- Premium bluetooth .
- Front lip spoiler (should have been on the car).
- Mild drop to eliminate fender gaps...the ride quality is perfect now (for me).
- Reverse oem rearview camera (just for the coolness factor for the guys).
- Alternate another set of 18" or 19" oem vw alloys.
- Maybe LED taillights

The GTI has been named "Piglet" by my niece.

It's weird, I grew up in a household where my father worked at GM and that's all we ever drove. I always had a soft spot for european cars though, mainly german. when i was sixteen i wanted to buy an old vw camper van, but that never really worked out.

After years of owning a couple chevy's, finally got my van in the mid-'90's! wasn't a camper, but it was a late 80's vanagon. I still miss that thing! I was commuting to school at the time and the vanagon was killing me in the MPG dept., so i ended up with a Mkll GTI. This car was amazing..loved every second of it.

Atfer 200,000 miles on the GTI, i bought a '97 jetta GT off a friend of mine that was goin' to turn it in from a lease. this car has gotten me through everything and couldn't have been a better car. I hate to get rid of it, but like the GTI, i'm just shy of the 200K mark!

I hated the look of the MkV GTI, so i never really considered another one. but this new generation has really got me stoked again for another GTI. I am though, however goin' to wait and see what the R20 (GTI-R) is goin' to do. i first thought that what they will charge for it might be a bit steep, but i think it would be a great car for the long haul!! :thumbup:

that it from NE ohio...mark
T

I'm Colby, USAF 2nd Lieutenant (in civil engineering) currently working temporarily in Bronx NYC, but soon to be a resident of Wyoming at F E Warren AFB. I've always been a huge fan of Audi/VW cars, I've been through two TTs, and I'm picking up my new MKVI on Friday! I got a 3-door in Candy White, with 18" Huff-troits, Bluetooth (9W2), Dynaudio, Bi-xenons and the Sunroof... I'll post pictures when i pick it up. 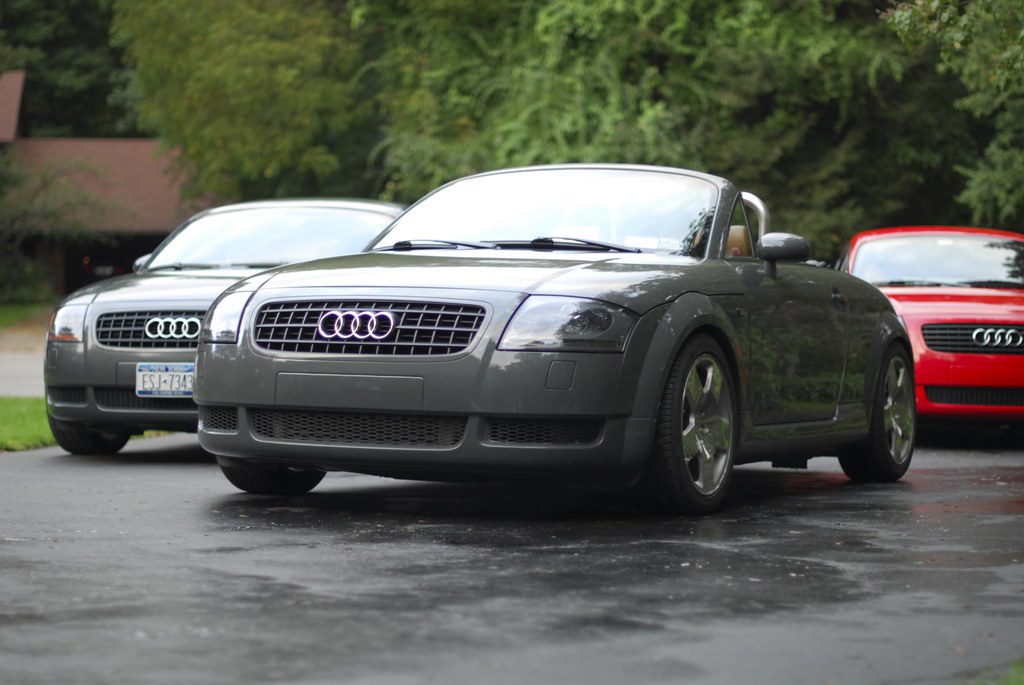 
looking forward to dropping the GTI and installing the Milltek non-res exhaust when it's available in the states. I'm so excited!!!

Heh, I'll just link to my thread in the other section...

So far the plans are chip, and then wheels/tires before suspension work.

I started young, at 14 driving my mother's Poop brown 1980 Diesel Rabbit, the ones with the volume control not an accelerator (push the accelerator petal down and the car got louder but not much faster) I know I was young but hey we lived on a farm 15 miles from town. I outgrew the rabbit shortly after 17, when I could no longer get my knees behind the steering wheel. I got a Chevy Luv Pickup diesel and drove it through 4 transmission failures. After the last tranny failure I got a Ranger pickup, and hated it for 6 months when my aunt was selling her 1985 Golf, I bought the golf at 9 years old and 44k miles, 10 years and 150k miles later, (over 190k miles on the car)
I traded the '85 Golf for a new 2003 Jetta TDI, 7 years and 100k miles later, it catches fire due to an electrical problem in the dash, (blower switch or radio)
VW took responsibility and I ordered a 2010 Golf TDI.
After my first two Diesels I said I would never own another diesel until they fixed the lack of power. When I test drove my Jetta, when I was on the highway doing 80, I found they fixed that problem. I figured the TDI had about the same power to weight as my 8v golf had, with more torque.

hey all!! i'm completely new to VW...i drove a Fiat Punto and a Subaru M80 (cars in Malta are immensely expensive ) before ordering my Golf MK6 1.4 TSi (122BHP)...car is arriving sometime next week..got it with multi function steering wheel (unfortunately it's an additional feature), double tinted windows and the sunroof...enjoy your cars...hope i'll enjoy mine
B

sorry forgot to mention ...plans for the future will probably include a chip

I am new to VW's and have had my MK6 for almost 2 weeks, so far so good with regard to any issues and I am really happy with the way that the car rides/handles etc.

I had looked at VW's in the last 10 years, but was put off by the reliability reputation and customer service ratings.

The GTI seems to fare better with regard to reliability and the dealer I bought mine from is a VW/Audi/Porche/Jaguar Dealer (1 service Dept for all makes) so I expect that they make customer satisfaction a priority, I have heard good things about them, so I took the plunge.

I have had a lot of Ford products in the past. The sporty ones I had include 3 different High Performance Mustangs, a Mercury Tracer LTS, and Contour SVT (Mondeo, to those outside the US). My last car was a Mazda 6 (my first automatic transmission car in 33 years outside of Tow Vehicles) which was OK, but I am happy to be back to driving a manual.

Not sure what (if any) mods I will make at this point in time. I will spend some time on this and other forums to learn more about VW's in general, and my GTI in particular.

Hey guys my name is Sean

I work sales for VW in Edmonton Alberta Canada.

I have some pretty lofty plans for my GTi, it all hinges on some dealer sponsorship however.

So far so good, but the electric mirror switch has already failed!! and it seems to take forever to warm up. My last car a Honda Civic had no faults in 6 years. Thus we will see how things go.

Hey There: I'm a Washington DC resident, have been since 1965. Born and raised in Manhattan, where my family never kept a car, once I got to Washington I found having a car was a must. Shortly after arriving I fell into an SCCA Racing crowd and have always had some sort of hot sedan. My last car before this GTI was a 2007 CTS-V (leased). I would have kept it but GMAC seems to be just as dumb as GM; wouldn't make a deal and convert a rational buyout to a GMAC loan. I've been attracted to GTIs for years and finally join this fraternity. I've had the car now for 10 days and drive it every chance I get. I'd go to Cleveland for bread and milk but have restrained myself so far. I'd like to post some shots of the car but the site tells me my images are too big. Advice on this please. Great to be a member of this Forum, a great source of information and guidance. Fun too.

I'm Ash. New to vw and car ownership in general. I'm actually a few months shy of 22, just been driving my parents BMW X3 for the last couple years [and before I was sideswiped into a tree, their Toyota Sienna - that had a number on my insurance hence not getting my own car sooner]

Starting a full time job for a major grocery chain at the end of January which should bring in enough moneys to afford wheels.. finally.

I've always liked the idea of the TDIs and I like hatchbacks. Seems like an easy enough sell. I think I'm going to go red because for some reason I find all the 5 door blacks look too... big without context. Almost like looking at a really, really small SUV, and I really don't see red all that much.

Hi everyone, my name's Chris. Just placed an order to get the 2010 GTi Mk6, black, manual transmission, standard 17" rims (felt like a smoother drive than on the 18's) and the fantastic tartin seats.

I'm based in Melbourne and like some of the others here, is new to the VW world.

As mentioned above, just placed the order for delivery in February... So long away! Can't wait to start driving it around town...
E

Hey! Wanted to introduce myself, just picked up my 2010 GTI. Carbon 4dr 6spd. Only been able to put 50 miles on so far and am loving it! I haven owned a VW since my 98 GLX. Good to be back in the game!