I'll sell it for 1200, there's a company that sells a FWD kit for it if you wanted to temporarily block off the t-case until you got the rest of the 4motion stuff down the road. The diff in this trans alone was $900
My big turbo and shaved bay build thread: http://www.golfmkv.com/forums/showthread.php?t=151460​
G

eurocars said:
I'll sell it for 1200, there's a company that sells a FWD kit for it if you wanted to temporarily block off the t-case until you got the rest of the 4motion stuff down the road. The diff in this trans alone was $900
Click to expand...

That's a good price; I'll think about it for sure.
DSG->6 Spd Conversion

eurocars said:
I have a 6 speed TT trans (for 4 motion swap) with an LSD already installed for sale...just sayin

I also know someone that needs a replacement 6 speed FWD trans if you wanted to sell yours to buy mine
Click to expand...

Haha I think I can guess now!

Anyway, not much progress today but I'm still pretty excited about this and so I had to paw around a little. Brought the car back from where it was stored and did a few things.

First, pulled the center console so I can get at the DSG shift box. Here's that. "Oh hey Volk-L, whatcha doing there? Shouldn't you be behind the radio?" addle: I'll have to fasten that somehow lol. 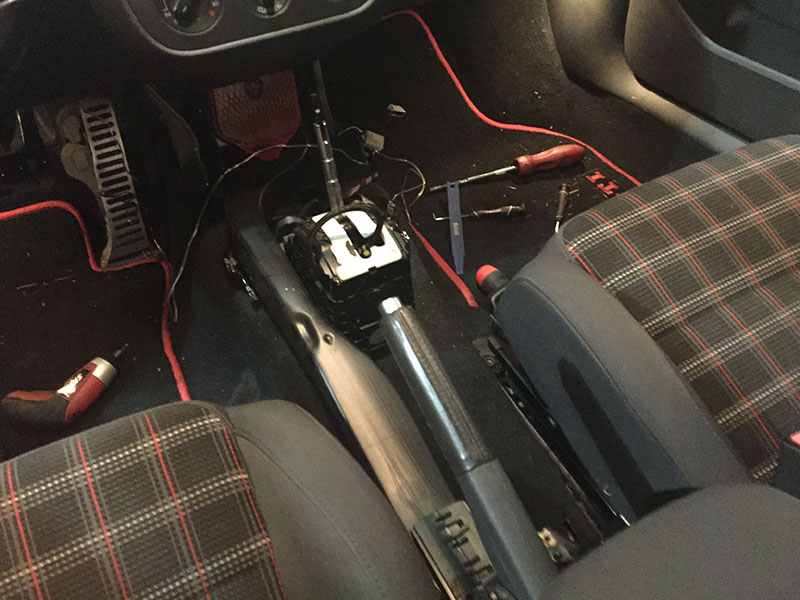 edit: BTW, I find those blue Schwaben interior trim tools--like on the passenger floor mat--to be well worth it. I used to tell myself I didn't need them and work around it with other tools not meant for it. Those are soo much easier.

Also took a look at the pedals and confirmed what I was pretty sure of for my car. Pulled out a piece of pre-cut insulation (they left only a couple tabs, I'm guessing that gets pulled on the line) to expose a set of three studs for the clutch pedal and a rubber cap. Pulled out the rubber cap, and there's the battery box. Awesome. :happyanim: 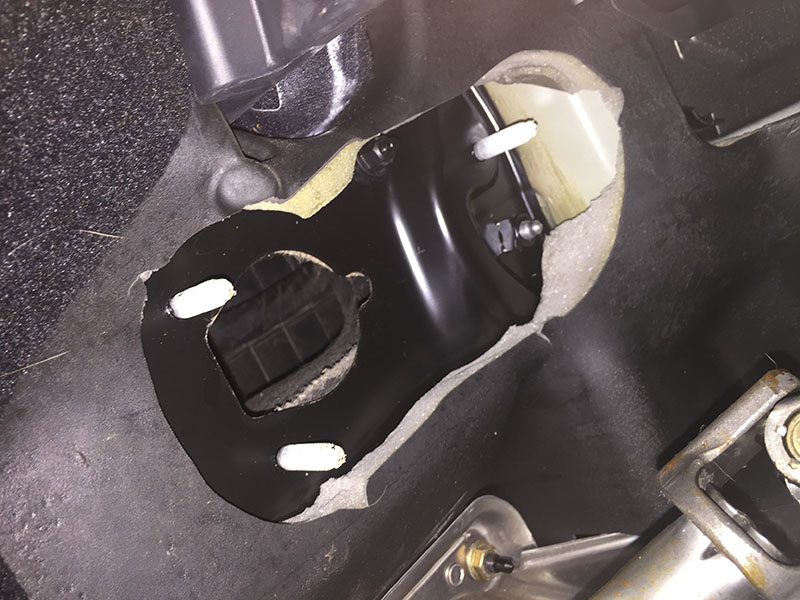 Oh, and had an interesting (but helpful) experience with some parts for the shift linkage. I received a very polite call from ECS looking for the VIN for some parts I'd ordered. I explained that I'm doing a swap and the VIN probably wouldn't help but they took it and would get back to me. I looked online and saw 'Customer Service' for order status, and assumed I'd messed something up!

Turns out they (as in VW, I think) didn't want to release the order to ECS for one component of the shift linkage by itself, but they would release it if I purchased a few other parts that correspond. I thought that was puzzling but the total was relatively small so said sure. Thinking about it, I'm guessing there's a VIN split on the linkage that might result in an incompatible or unsafe combination of parts. Nice to know that someone is paying attention to these things, although it's definitely a reminder that I need to be careful! Also props to ECS for handling things quickly and politely--not to mention sponsoring this forum! There will be a whole bunch of white boxes on my doorstep with their logo soon.
DSG->6 Spd Conversion
U

I have an OEM transmission I just took out of my car. Not modified. I posted for $500 but flexible.
G

That's awesome!! And thanks!

In other news, the ebay junkyard parts are starting to arrive. 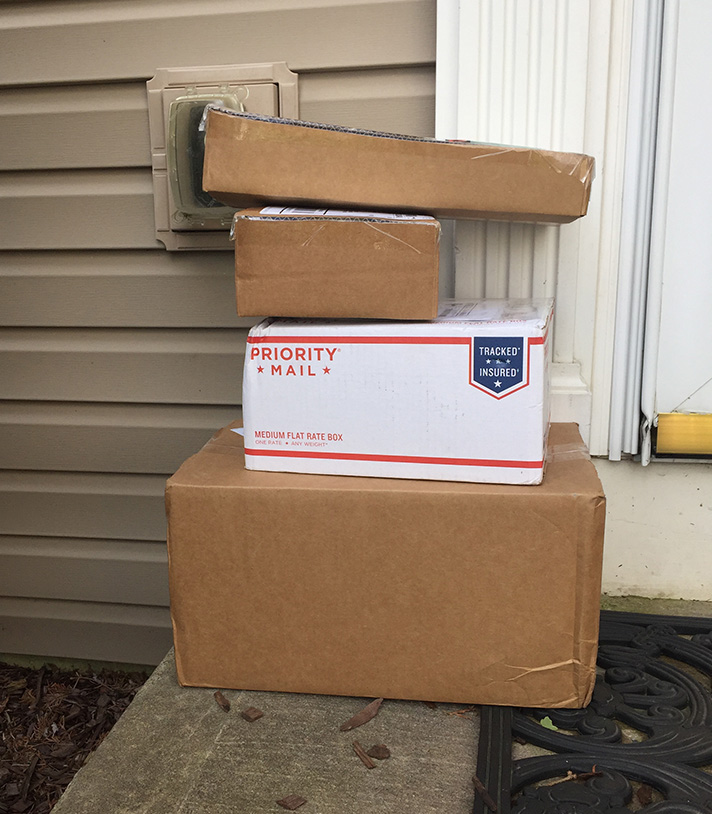 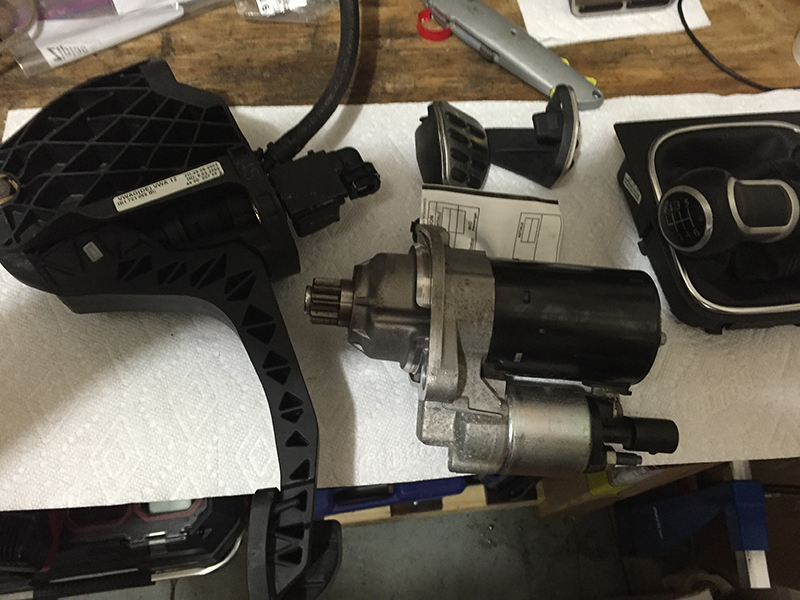 xSabretoothx said:
Excellent, while you're doing all that work....you could swap in an AWD set-up from a Golf R, just sayin'
Click to expand...

Now that's a thought. For example if I can drop a golf R standard 6speed in my R32. Except all the other bullshit involved seems off putting with costs, time unavailible to undertake.

Yeah, I think that might be a bit more trouble

golfballer78 said:
Now that's a thought. For example if I can drop a golf R standard 6speed in my R32. Except all the other bullshit involved seems off putting with costs, time unavailible to undertake.
Click to expand...

Not sure but I don't think the 2.0T transmissions will bolt up to the VR6. I seem to recall someone talking about a TT 3.2 transmission though? Would be awesome...I love the 2.0T but it's no wookie.

A little bit more progress today. Here's the pulled DSG brake pedal alongside the replacement 6spd brake pedal from an '06 A3. Kind of looks like they start out the same thing, with the DSG pedal having a couple of plates welded in. The platform is an obvious addition but I was surprised to see one on the back too--might be for torsional rigidity with the wide platform. Can feel the weight difference when you heft it; maybe a lb or so. 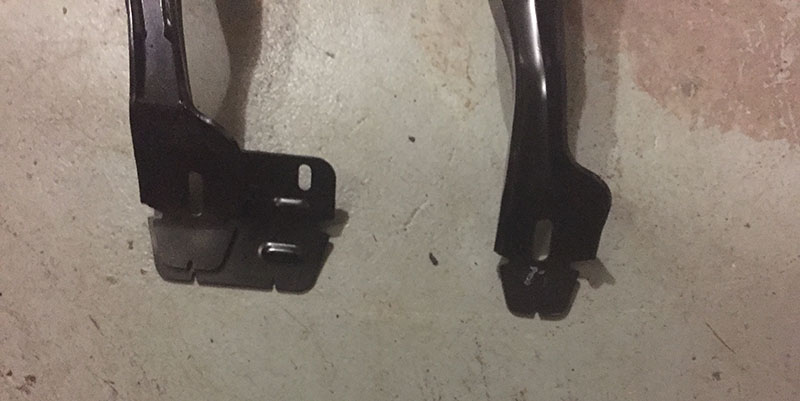 Also dropped in the clutch pedal from the same A3. It's sagging and I haven't bolted up the covers--I'm still waiting on flange nuts in the mail. The clutch pedal I bolted in the whole assembly incl. master cylinder, sensor, mount, etc. The brake pedal I was able to swap out the arm only; re-using the mount and master cylinder. Everything seems to fit but I still need to check ETKA and make sure I'm not using anything that's not compatible. 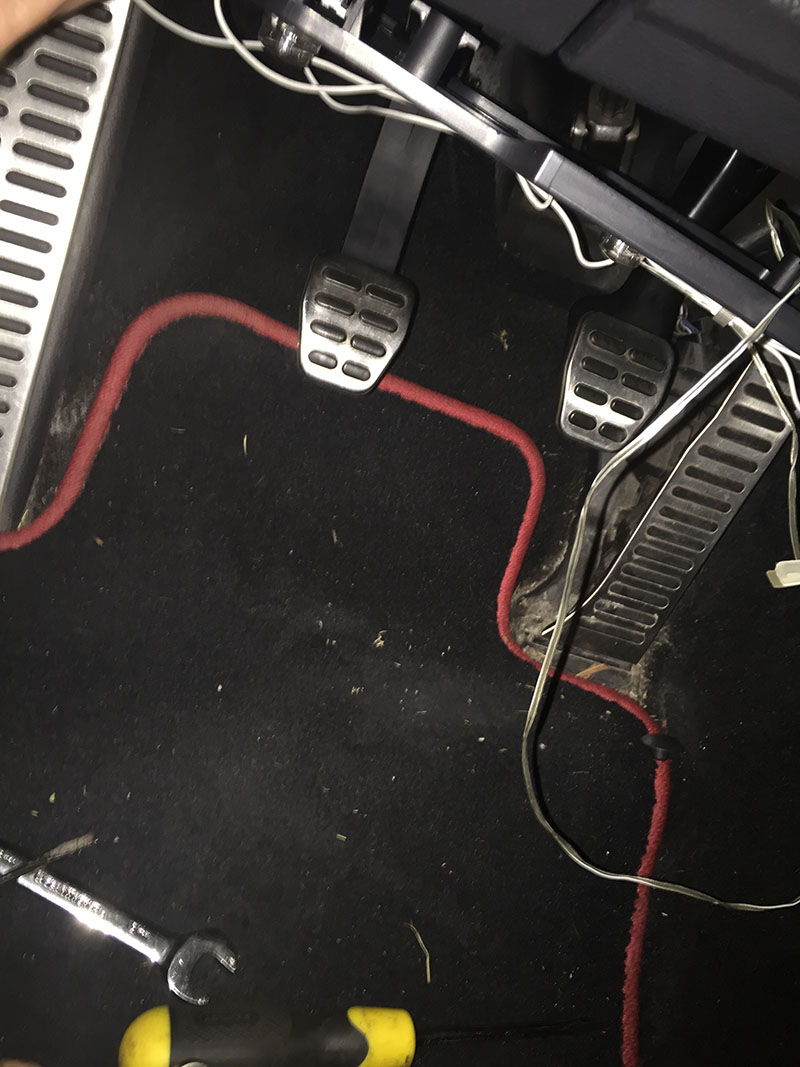 Wow, great project. I would have bought an uprated Sachs clutch but you might get lucky with stock.

zrickety said:
Wow, great project. I would have bought an uprated Sachs clutch but you might get lucky with stock.
Click to expand...

Yeah, I'm not putting a lot of faith in the stock clutch but wanted to see how it does first. If it doesn't work out, I'm hoping that dropping a transmission the second time around will be a little easier haha!

At any rate, things are still going smoothly and made some progress over the weekend. After getting everything supported properly, I pulled the axles and, although I know you can get the 02Q out without dropping the subframe, I wasn't sure about 02E so just went ahead and pulled it: 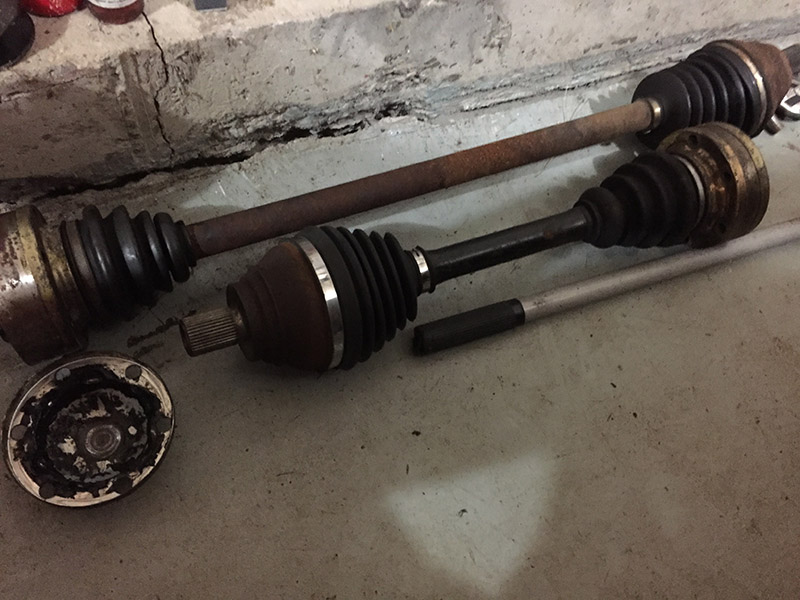 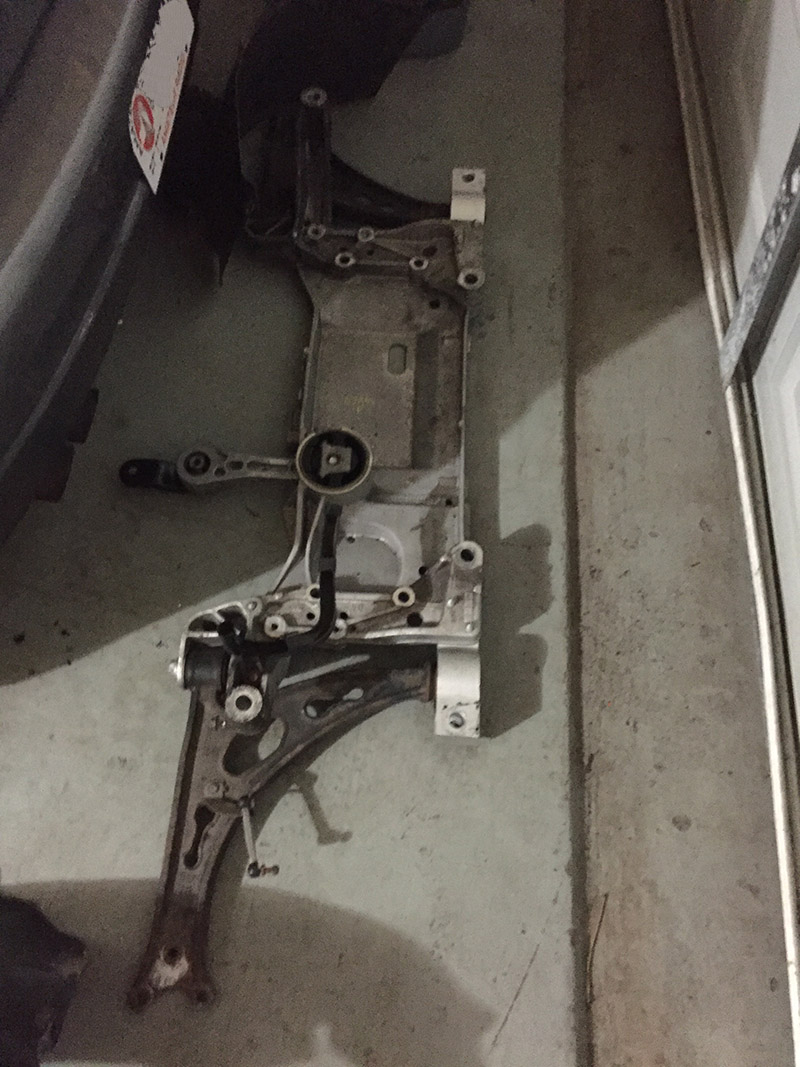 Then took a break and ran my RC Short Course Truck through the mud: 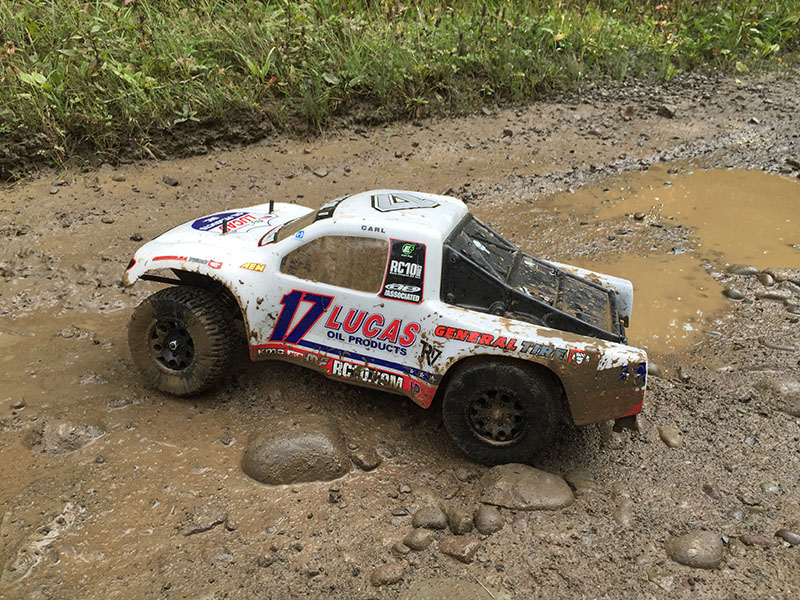 Got back to work and pulled out the trans bolts. That was mostly straight forward, but was surprised to find 1. a bolt inside the starter housing, and 2. this: 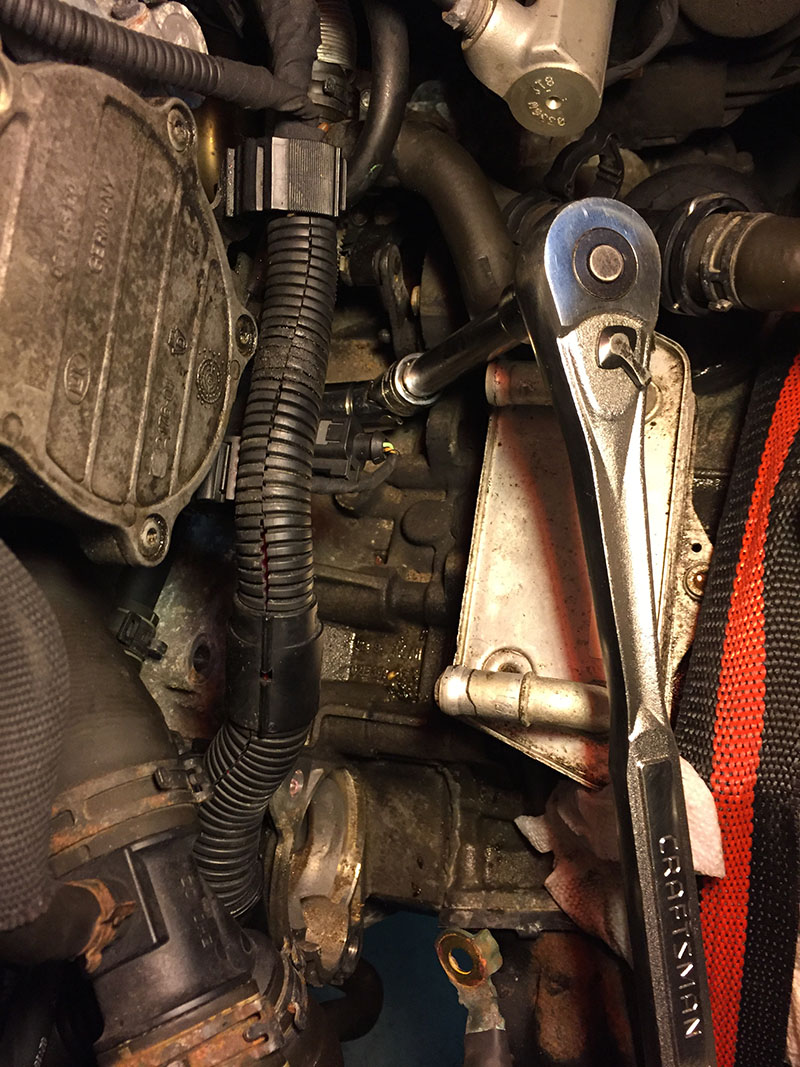 Wouldn't be a VW if I didn't have to rig up something crazy to break a bolt loose. This scared me--I really really did not want to strip or break a tough-to-reach bolt that's in the engine block. I took my time and it went smoothly. Also note transmission oil cooler--lines are pulled, plugged, and pushed off to the side. The lines are offshoots of the heater core lines; I don't intend to drive it plugged--that seems like trouble waiting to happen. So I've got the heater core lines from a Golf R to plug in, which don't have the smaller offshoots.

02E is out. I'll post a comparison with the 02Q when I get a chance to line them up side by side and maybe put them on a scale!

Oh, and stopping by the dealer today for a gasket to fix that vacuum pump seepage.
DSG->6 Spd Conversion
G

And then flywheel, clutch, bolts, gaskets, etc. are all new.

First, the comparison! DSG is noticeably bigger and heavier (and harder to maneuver out of the car too). I'm glad I removed the subframe. I carefully weighed them on a bathroom scale. Not sure how accurate it is, but DSG came to 181 lbs and 02Q was 109. That doesn't include the clutch, pedal, and shifter, but it still should be a 60-70 lb swing from the front of the car. Nice fringe benefit and adds to the drivers car vs. fast car appeal of the 6spd over the DSG. 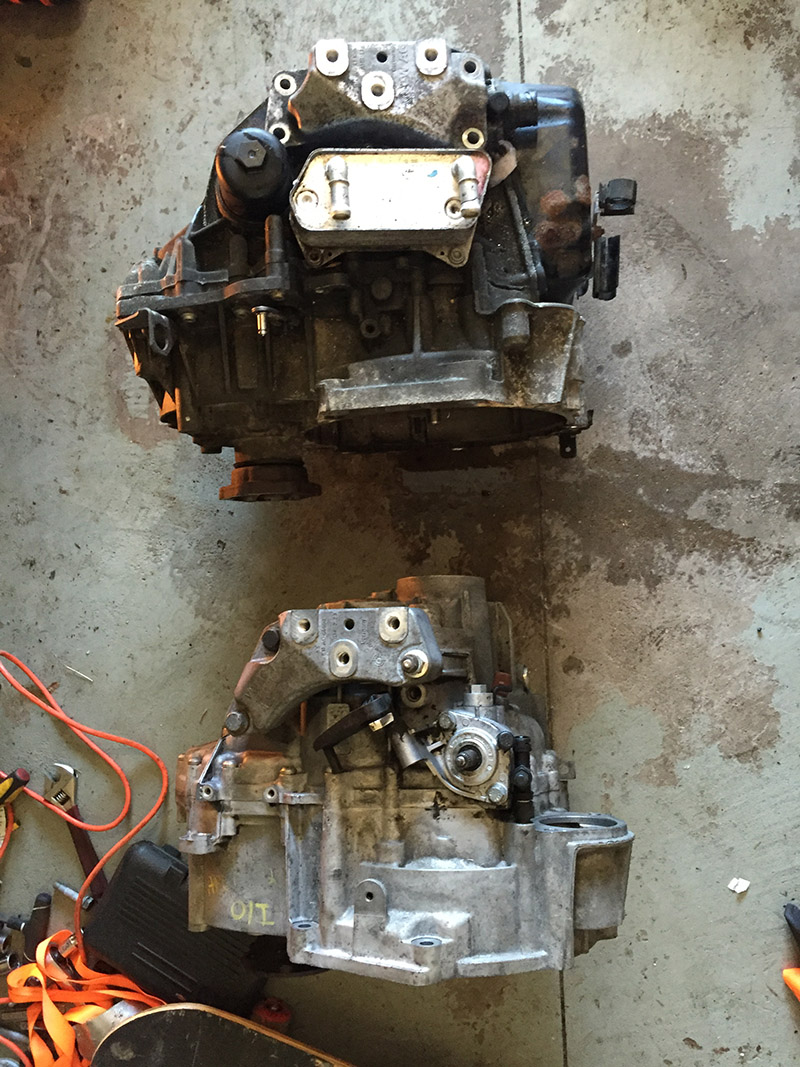 Pulled the shift box out while there was lots of room. Still waiting on the manual shift box. I had one shipped from Germany but I suspect it's on a boat--I'll be making a trip to a junkyard for one soon. 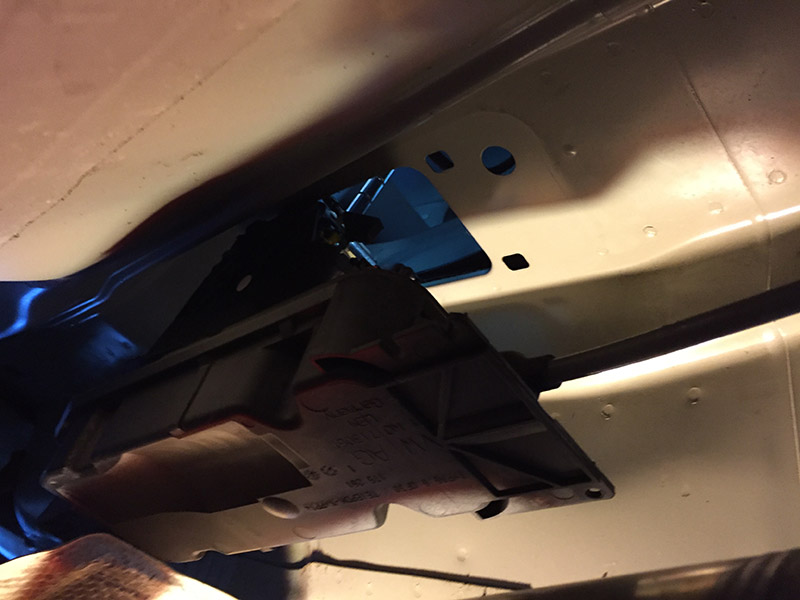 I was on the fence about pre-emptively changing the main seal. It was bone dry, so I decided not to mess with something that works. Note the new plate--DSG one wouldn't fit, and was tired anyway I doubt I'd re-use it. 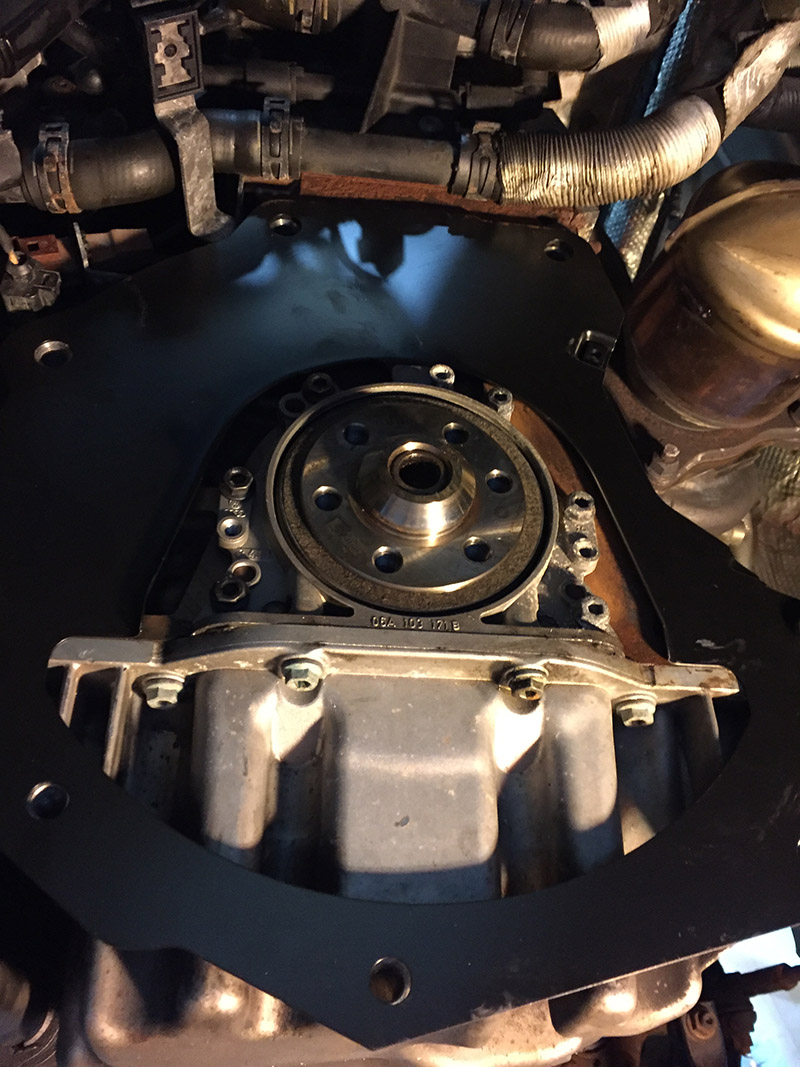 Clutch all set up. Aligned and torqued to spec. Used a new flywheel as well--I had bought one from a junkyard but it had 1-1/4" of travel so it went back. New one had about a 1/4". 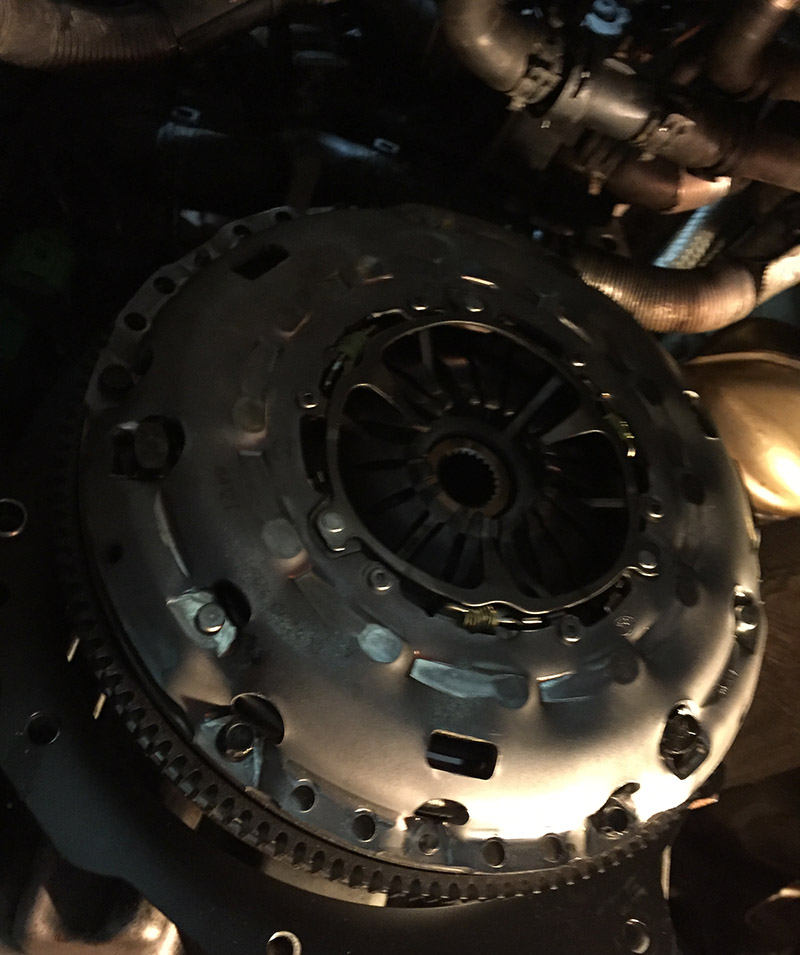 And the 02Q all bolted up and mounted. 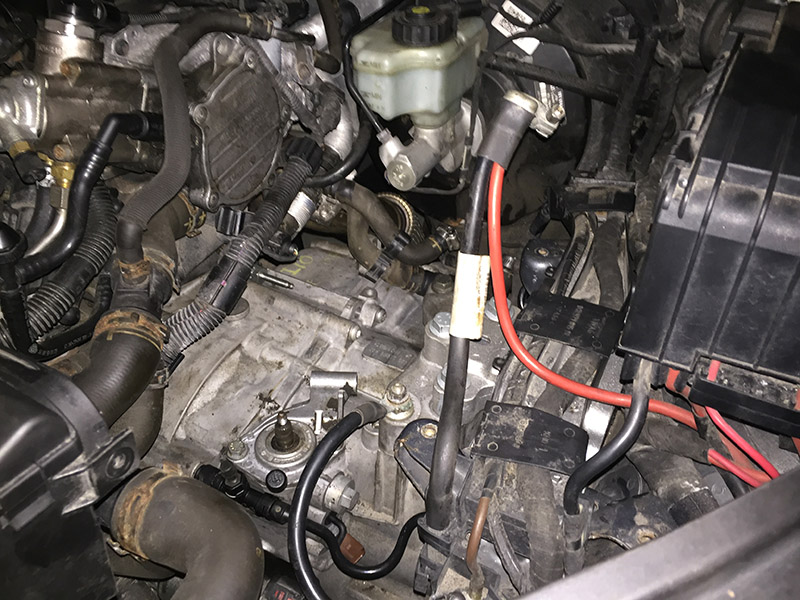 I still need to bolt up the axles and subframe, put the shift box in, wire up the sensors, and recode using VCDS. I believe I have a pretty good handle on that so this is taking shape nicely.
DSG->6 Spd Conversion
You must log in or register to reply here.
Share:
Facebook Twitter Reddit Pinterest Tumblr WhatsApp Email Share Link
Top