07GTI-2.0T said:
I don't log fuel trim! (ANYTHING: boost leak, less than optimal injectors, o2 sensor ect can affect fuel trim % and my car is old). If air mass is high, timing isn't being pulled and air/fuel is what its tuned to be why should I be concerned about long term fuel correction? If there are intakes that pull more air and/or allow more timing advance great. Working better and broke aren't the same.
I never made a dollar per hp argument, you keep saying that when I say ass-o-meter( perception of feeling its doing something). They are not the same. APR HPFP + GOLF R intercooler ( both done at the same time along with fuel pump flash) didn't register that high on my fun factor either. The quicker boost response along with power boost of the catless DP was instantly more gratifying. May be lots of parts or combinations that make similar hp, tune followed by DP are by far most satisfying to drive. Matter of fact I'll go as far as saying once you've done that only a turbo upgrade ( maybe water/meth don't know) is satisfying. Might as well do suspension after tune and DP...does not mean you can't get more hp...but u still have just another stage 2/2+ and still going to want more after 30 minutes of name your bolt on.
Click to expand...

That's 4 of them, including mine that's had this issue. My car has had good fuel trims with every other intake.
Driver Motorsport
Engineering@drivermotorsport.com

That's 4 of them, including mine that's had this issue. My car has had good fuel trims with every other intake.
Click to expand...

That's 4 of them, including mine that's had this issue. My car has had good fuel trims with every other intake.
Click to expand...

Unicorns with bad breath lol... But seriously i would love to see a before and after of the p-flow to forge twintake data logs..... I do not doubt that the twintake is supperior in craftsmanship, for 400+ it better be. But i still have seen more people complain then show one piece of evidence showing fuel trim or advanced timing and the intake was the undoubted culprit. Let me clarify when I have seen data logs they could not clearly point to the intake as being the culprit because other items were changed on the car at the same time.
I had when I purchase my car used with 30,000 miles from a dodge dealership, an advance in timing of +3, I installed new spark Plugs and the newest updated coilpacks. I also installed the new revision D DV with forge blowoff spacer, and an intake i pieced together for super cheap. Well my car runs so much better now its a BEAST!!!
All I have stated right now is my own experience, I mentioned an advance in timing but I have no solid proof.
Ok now I have proof but as mentioned I installed a bunch of other cool shizits too.

Im not doubting the possibility of some advance in timing and possibly fuel trim, but before I ever spend +400 plus i need solid numbers supporting and justifying the cost. Right now to my knowlege there is no solid proof to justify spending that kind of money other than those who have that are happy or very happy with there purchase for +400 plus, you better be happy spending that kind of money.

I like the look of the TwinTake i really do. I love my car too. I have owned sevral cars in my 35yrs and not one was as fast or had the pottential my 08.5 Jetta Wolf has except one and that was my 04Acura RSX Type S. I can repeat something a million times but saying or repeating what someone has sad as fact without some form of solid proof does not make it true.

Yes I would like to get the Twintake, I am now replacing my intake mani and painting it. The two would look pretty together but that wont happen anytime soon unless someone can show some solid proof other than what there butt tells them.

One last thing, if you do get the proof i will be happy as hell to go out and get the Forge Twintake, Seriously i will.
FYI just to make some of you jealous my car was previously owned by an elderly couple, my car may have had 30,000 but this couple neither could walk fast they can barely see over the steering wheel and they drive slow as hell! My wife who used to work at the dealership told me of the car i was there in no time to check it out and it wasnt even a done deal. She working in Finance got to talk to the couple and asked them about it, they didn't have a clue when she told them it was turbo charged. The car fell in my lap with little baby angels and all this light and music LMAO

just get a flux capacitor

Sound? All you'll hear more of is loud turbo noise. CAI all are worthless!
Had two on my car and seemed to lose power. Noise was distracting as hell!

Wild Hare said:
Sound? All you'll hear more of is loud turbo noise. CAI all are worthless!
Had two on my car and seemed to lose power. Noise was distracting as hell!

this is coming from the guy with a picture of his car in the clouds.

Everyone is missing the fact that OP is buying an intake for the sole purpose of sound.....

OP just get an exhaust if you want your car to sound "cooler."

Swiper said:
Everyone is missing the fact that OP is buying an intake for the sole purpose of sound.....

OP just get an exhaust if you want your car to sound "cooler."

I'd rather hear engine note over exhaust note any day. Much like everything else on MKV though its all preference.

Ok well then buy an intake based on quality and performance and not noises.

Hmmm.....this thread was a very long time ago. After all of these posts were made here...the MK6 Golf R (also the EA113 engine) had come out. Their forum did an intake study, if you will, having people share what their fuel trims were with whatever intake they had. If I read it correctly, they would post an average once near ten posts were made with the fuel trims for their specific intake. I also believe their reports had to have a specifed minimum of miles....because if you clear codes and go for a very short drive...the trims will typically be skewed toward a number closer to 0%. So, what you see in the pic is from that thread. It appears the OE air-box obviously had great fuel trims...the best. Then Volant and EVOMS (Evolution Motorsport), being a plastic composite, also had great fuel trims in matching the OE air-box. CTS Turbo, for being alloy, did very well. They probably either got lucky with non-disturbed flow at the MAF and/or MAF position, or they did plenty of research during development in order to get it right. Other than those, the P-Flo and post-warranty VWR were next best. If you do not see some on the list...it is because they didn't meet the required number of posts. But in going through the 80+ pages...I saw some like REVO were reporting +9% to +15%. RAMAIR didn't have very many posts as those are mostly sold in the UK and Europe I believe. But on the UK MK5 forum...people post those too are near +10%.

Mine is a P-Flo and I just looked the other day to find it at +7.8%. Please know that it doesn't take much to increase furl trims. Some years ago, mine was near +18%. I could've just concluded it is from it being a p-flo. But I smoke tested it. I found smoke coming ever so slightly from the MAF seal. I fixed that and dropped the addition by 10%. So, there are factors the intakes are not responsible for...although I could still blame Neuspeed for not getting a proper MAF housing for their intakes so MAF sensors would seal properly. Anyway...wanted to share all of this for future searchers: 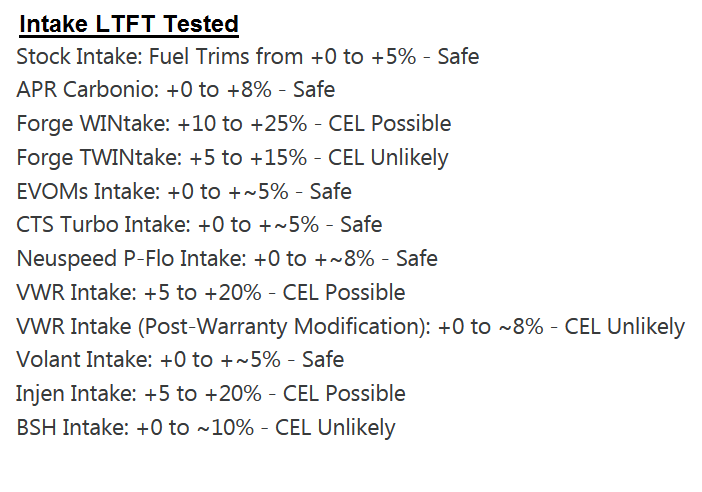