Anybody a video game junkie?

Don't ever think I'll out grow them. Nearing my 30's Ive generally stopped playing anything "new". And by new I mean in the past 5 years. I mostly play everything from the 90's now.

I've always loved video games...been playing since the '70s. My kids love them as well, and it's been fun to watch them eclipse my skills over the years.
Space for Rent
X

Don't play nearly as much anymore, but Destiny has been my game lately. Really want to grab the new God of War.

Used to be big into the Battlefield games. Don't have the time anymore and don't want to play those games in front of my kids, either. For now it's just Mario and Zelda on the Switch.

53 and play "War Robots".
Games are a long from Pong.
Sandman
My Build Thread: http://www.golfmk7.com/forums/showthread.php?t=6100
[SIGPIC][/SIGPIC]

Still play nhl and good old call of duty when the little one is asleep on the good old Xbox.

Been thinking about reliving my youth and buying an n64 lol

+1 for video games, 26 yrs old and been playing forever. I probably wont stop. Funny when I was younger it was one of my expensive hobbies, now my car is haha. Next will be buy a house then thats gonna be the expensive hobby lol

Started playing games on the computer around 1979 or so, on mainframes. Got my first PC in 1983; can't recall when I got my first Atari 2600 console though. Since then, I've mainly been into PC games, though I've owned Amigas, Ataris, Commodores, and Macs, as well as consoles of various types. For quite a while I was a writer then an editor in computer games journalism; I published a ton of reviews, previews, news items, etc. over the course of many years.

Today, I still play computer games often, though nowhere near in the variety of yesteryear. Just as importantly, so does my wife, who was also a games journalist for many years. I also teach at a school with a very large and strong game studio, where we grant bachelor's degrees in things like Game Design and Game Programming, all that stuff. So I still work professionally with game stuff even today.

cbaumy34 said:
Been thinking about reliving my youth and buying an n64 lol
Click to expand...

I have done this one more than one occasion hah.
I have an urge to play some older stuff so I buy one.
Quit playing it, sell it.
Want to play again a year later so I start the process again lol.
I have been doing this with N64 and Dreamcast for the last 10 years. I still have a Dreamcast but it is in a closet somewhere.
Never been a PS guy, currently have an Xbox One and all I do is play Forza. And that is maybe a couple of times a month hah

All you other old-timers out there should check out RetroGamer magazine. It's printed by Future in the UK and is just chock-full of awesome, back-in-the-day goodness.

I get the print magazine through an Amazon subscription. It's far and away my favorite VG monthly...
Space for Rent

^Thats awesome I will def check that out.

And actually this brings me to a hot topic I like to discuss. So to the parents in here, how are you handling exposing your little ones to violent video games/movies/media?

Still young, but I don't ever see myself growing out of video games.
Click to expand...

Thanks to many humble bundles back in the day I'm also almost in the 500 club. I think this earns us a place in the DSMIV.

In all seriousness though, I'm almost 35 and still play a ton of games. I don't see myself stopping while my hands still work. 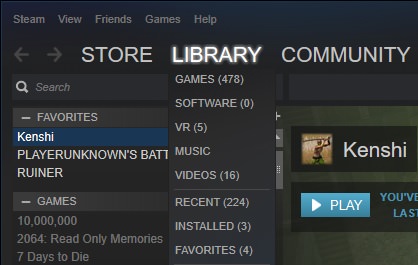